Nothing gold can stay 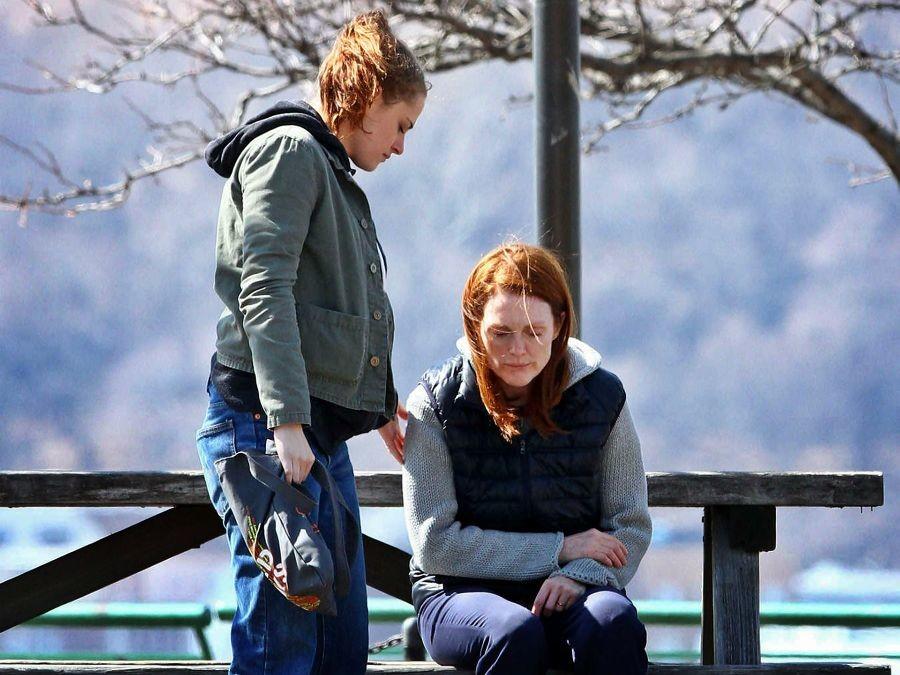 Lydia Howland (Kristen Stewart) helps her Alzheimer's-ridden mother off a park bench. Alice Howland (Julianne Moore) is hardly responsive; she bears a cross she deserves not.

“Still Alice” (PG-13) is the kind of movie you go to see if you either want to feel better about your life, or you just want to sob for an hour and a half straight.

Alice Howland (Julianne Moore), a linguistics professor at Columbia University, forgets words. Gradually losing her grasp on memory, Howland is diagnosed with early-onset Alzheimer’s disease when she is merely 50 years old. At this point in her life, Howland’s three children are transitioning into adulthood, finishing school, and having their first children.

“Still Alice” epitomizes tragedy when Howland finds herself holding her grandchild, and forgetting her own child’s name. Whenever the audience comes close to forgetting how young Howland is to be suffering from Alzheimer’s, they are promptly reminded again.

The hardest part to watch is how her family deals with the news. But, it is also the most compelling element of the film, because it captures the stark reality of the situation. “Still Alice” is truly commendable for resisting the urge to “Hollywood-ize” a real occurrence. The disease is given the cleanest, most accurate portrayal, and that is why it is so hard to watch.

Moore’s command performance won her an Oscar, and you can bet your bubblegum she deserved it.  Moore delivered sincerity and delicacy to a tragic role.

Sitting and watching, I found myself no longer concerned with the petty problems plaguing my privileged life. Here was this woman, struck by an affliction beyond her reckoning, who continued to prevail against all odds. It is as Howland’s doctor notes that the most educated and industrious patients are the ones who find innovative ways to manage the symptoms, often prolonging their hold on who they once were.

But, as is depicted in this uncanny resemblance of reality, the self eventually is lost to the disease, and everything that she once worked for — her intellect, her career, her relationships with her loved ones — dissipates into the ether. It is perhaps the most devastating thing to watch, but in the case of “Still Alice,” it is treated with all due care and compassion.

By focusing solely on the Howland family, “Still Alice” addresses the effects the disease has on kin, without getting distracted by ulterior plot lines or conflicts. The movie is about Alzheimer’s disease. There is no beating around the bush. The reason for this could be that directors Richard Glatzer and Wash Westmoreland wanted to fully ensconce the audience in the life of one patient and, in doing so, examine a situation through a concentrated lens.

Melodramatic, aimless scenes accompanied by depressing, cliche violins break the tension between nitty-gritty real scenes. As Howland loses her memories, we see grainy videos of her childhood days on a beach. Honestly, some of the cinematography felt a bit forced, but the poise with which the disease was handled made up for it.

What made “Still Alice” cringe-worthy was the predictability. Everyone — the audience, the family, the doctor — knew where Howland was headed. And, when she reached the pinnacle of humility and could no longer control her own body or mind, the tears came flooding down like Niagara Falls.

I felt an inseparable unity between my fellow humans at the moment when Howland, stripped of all dignity, took the podium and vocalized the inescapable position she was in. There is no cure. No way back to what you once were.

Only a linguist could have such mastery over words. Yet that very same linguist was the one who could no longer remember words.

“Still Alice,” based on the novel written by Lisa Genova, touched on more than one social inquiry. It addressed familial duty, ending with the daughter who quarreled with Howland most becoming her caretaker. It addressed humility, and scared us all with the implication that it could happen to anyone. Predominantly though, it addressed respect. It opened our eyes to the fact that those bums puttering around nursing homes may have once been astrophysicists. Against any of our own volition, we all will age. And, to some, that means an end to the person we once were. May we go on now to make something of our lives, for we never know how long they will last.