Numbed by the Media 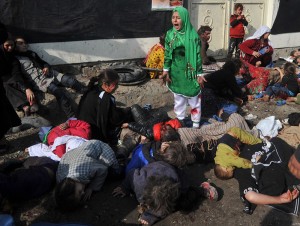 There’s a feeling of numbness when it comes to watching people across the globe dying on television.
It’s too simple to just flip the channel and carry on with the day as if nothing has happened, as if those people weren’t really dying.
The only reason these horrid detachments are possible is because of the regularity. It’s normal to turn on the T.V., to watch a cartoon, and for a few seconds before changing the channel, see children being gunned down.
It has become common today to have a tragic event occur such as the Sandy Hook shooting and then be engulfed by a 24-hour span of speculations about the occurrence along with strong appeals to pathos in order to provoke emotions such as fear or sadness.

But after the fuss dies down the next breaking story is already rolling in after the commercial break, as if nothing ever happened.

Most Americans feel too helpless to affect change in a meaningful way, but why not start with little things such as joining a committee against gun violence.
There’s not much that can change about what’s being shown on television. News comes in a pre-set package which is made to draw in viewers give them something to opine over and have reactions too.
But watching endless video clips of people being killed in the middle east isn’t contributing to the cause, since no one sees it as abnormal.
The present day mentality seems to be, “If it’s not affecting me directly then why should I care?”
This is a hard mental block to work around because no one sees past the black and white and into the gray area, which is what would you want if your home was being bombed and others across the globe were watching. Of course you’d want help.

Follow the golden rule taught at an elementary level; treat others how you want to be treated.