Obama promises too much 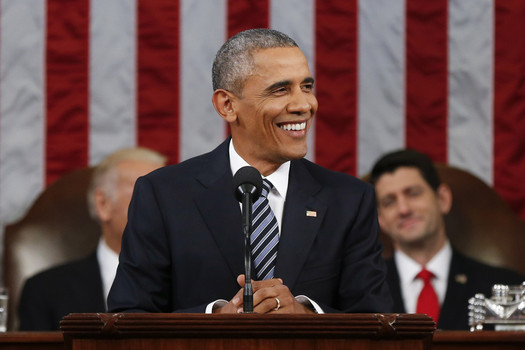 Obama details his plans for 2016 during his final State of the Union address.

It is reminiscent of every other State of the Union given by the President, except this time, Barack Obama is ready for his departure.

But the president won’t go down without a fight. Obama plans to issue as many new plans as he can before his final year as President is up and he is replaced.

“The U.S. is the most powerful nation on Earth. Period. It’s not even close,” said Obama.

And at that moment, everyone in the room stood up with applause because it was true.

In an enclosed room of the members of Congress, the Pentagon, and his own Cabinet, President Obama announced on Jan. 12 during his annual State of the Union that he would lead the U.S. in curing cancer, keeping America safe, and destroying ISIS.

However, will he be capable of creating these reforms?

Obama began his address with a list of his achievements. According to the President, there have been 14.1 million jobs created with only 5 percent unemployment ever since he took office. His numerous programs for both education and health reform have aided those in need.  And because of his efforts, America has cut its carbon pollution more than any other country.

“Our troops are the finest fighting force in the history of the world,” said Obama. “People of the world…they call us. We must help those who are weak and vulnerable.”

However, the president later stated that there are many obstacles that accompany these goals. The U.S. cannot help every nation with a crisis. If it did, then America itself would be left in ruin and poverty.

It would seem that the goals promoted by Obama call for this. Stopping cancer and destroying ISIS are extremely ambitious goals. In January of 2015, Obama said that he would raise the minimum wage and create more jobs, but even these goals were barely reached.

Much like in previous years, the only thing Americans can do is wait. Obama did accomplish incredible things, like chopping off the head of al-Qaida and raising the employment rate.  However, for his final year, the new priorities may be out of even his grasp.