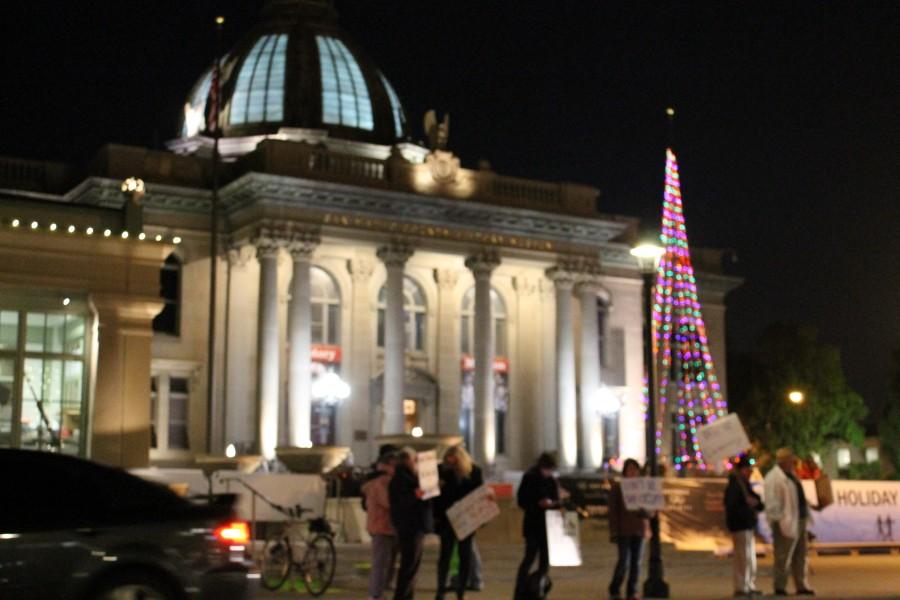 It was a festive, cold night last Friday, Dec. 9, in Courthouse Square of Redwood City as holiday shoppers mingled around the ice rink setup in front of the San Mateo County History Museum.

However, perched on the corner was a new sight: Occupy Redwood City. Comprising of about a dozen or so protesters, the occupiers chanted it’s slogans as cars honked by.

“How about getting more efficient-let’s cut waste,” one protester commented. Protesters handed out bright orange flyers as a response to comments made by Jeffery Ira, Redwood City’s mayor.

Specifically, the occupy movement targeted on comments made by Ira who described the movement as “well-intentioned but misdirected.”

The occupiers also took the time to respond to the most common criticism of the Occupy movement.

“[The occupy movement] is not about specific goals so much as it is a wholesale rejection of the entire system that has created this global mess which the ninety-nine percent are suffering under,,” protesters wrote on fliers handed out.

One protester, who asked to remain anonymous, provided an example saying that, “NDAA s1867 will make it legal for the government to arrest citizens without trial or charge,” referencing the National Defense Authorization Act for the Fiscal year 2012 sponsored by Michigan Democrat Carl Levin.

If passed, this would allow the President to have citzens accused of membership or compliance with a terrorist group to be detained in Federal prisons without trial or formal charges.

The bill passed the Senate on Nov. 30, 93-7, enjoying bipartisan support from both Republicans and Democrats.

The bill is currently stalled in the House of Representatives, and President Obama has threatened a veto if changes to the law are not made.

The protest was otherwise uneventful, no ports or streets were shutdown-there were also no signs of the police or county sheriffs around the square either.

From inside the Museum overlooking the square, Susan Smith, the Event Coordinator for the San Mateo County History Museum, said, “I had no idea they were out there… Their message isn’t clear.”

Holiday goers enjoying the ice rink didn’t seem to have a problem with the Occupy movement.

“Occupy is in the wrong place, they should be in Congress, who is tied to the businesses running the country,” stated Jim Hood, a Redwood City resident.

Others weren’t as receptive, one couple agreeing that, “They need to pick it up… Get some responsibilities or a hobby.”

From the Occupy Redwood City website, more demonstrations are planned every Friday night from five to eight in the evening.