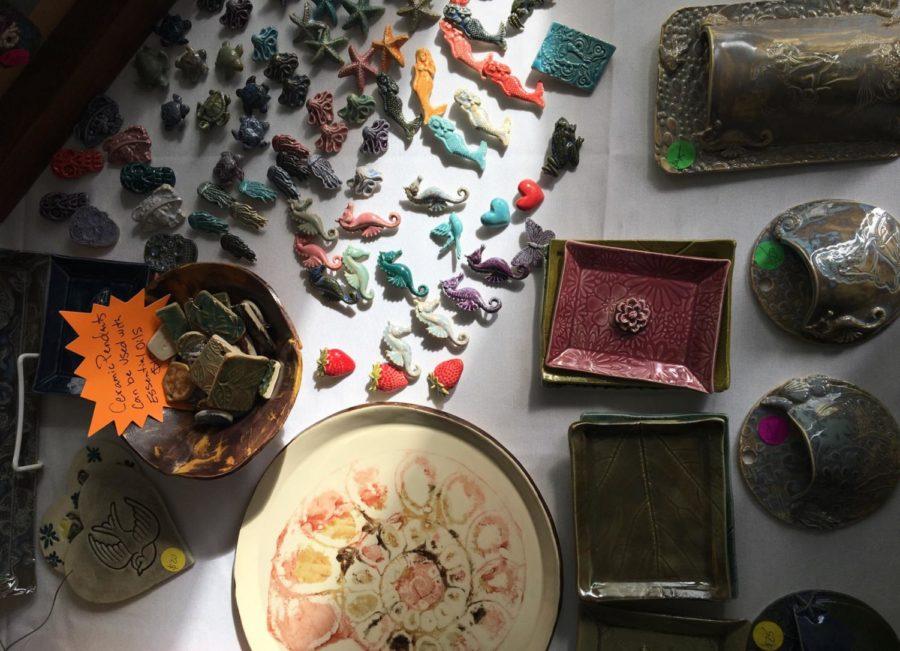 Ceramic pins are displayed on a table at the art festival.

On Nov. 4 and 5, crowds gathered in Santa Cruz to look at and purchase ocean-themed art and jewelry. The Santa Cruz Sea Glass and Ocean Art Festival is focused on ocean art, in which a portion of the proceeds is donated towards ocean conservation efforts. The admission was a mere $5 and each ticket came with a raffle to win a basket of donated art.

The art festival, which has been around for nine years, was held on the top floor of the Cocoanut Grove at the Santa Cruz Boardwalk and included over 40 vendors. Though many vendors were local, some came from as far as Pennsylvania and Hawaii.

Handmade tiles, kaleidoscopes, and even culinary salt were sold in addition to sea glass. All tables were popular attractions for the attendees. The culinary salt was sold by Farmer Freed, which Emily Freed started after she made popcorn salt for her friends.

“One afternoon I was experimenting with herbs and salts, and I realized I could start a business when my friends kept demanding more,” said Freed. “Now I’m here.”

There was also a variety of the types of glass being sold, many of which presented in the forms of lampwork and fused glass. These pieces, while not made from sea glass, focused heavily on the ocean. Marine animals were common subjects in these works.

“I’ve worked with a lot of different mediums and glass is by far my favorite,” said Jana Ashley, a lampwork vendor. “I love the way the light reflects, and you can see that throughout this room.”

Despite the differences in artistic expression, every artist had an appreciation for their peers’ work and the ocean in general. Every vendor showed their love differently, collecting groups of like-minded people to appreciate their art.

“You look around and think you can’t be surprised, and then you go to the next table and they have something different,” said Jennifer Reed from Relish. “I’ve been here for eight years and I always see something new to be excited about.”