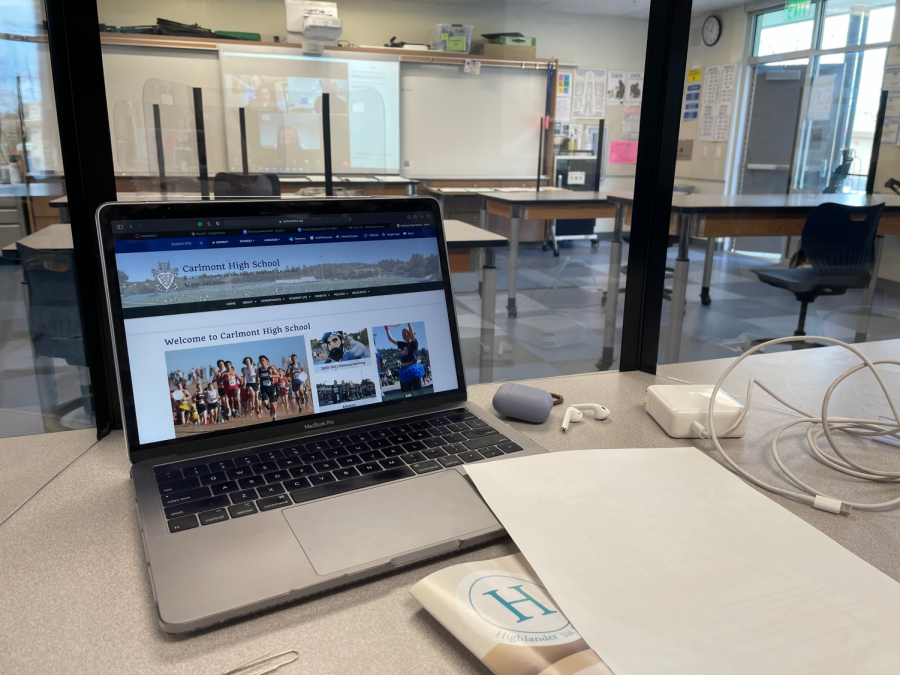 Students are expected to bring a device and headphones to connect to Zoom.

“We’ll be back at school after Spring Break,” the district told students in March 2020.

This assumption was correct; only it was a full year later that students could return to campus.

Sequoia Union High School District (SUHSD) reopened at 25% capacity, with only 130 students at Carlmont on April 5.

Before reopening, students and parents had the choice to “opt-in” to in-person learning. Once the administration collected a final tally, the students that did “opt-in” were divided into four groups- A1, A2, B1, and B2.

The first group of students, A1, returned to school on Monday, April 5. With about 5% of students on campus, it made for a different environment.

“It’s strange because not all my classmates are there, but at the same time, face-to-face interaction is good,” said Sofie Hai, a junior.

Students checked in at the Scots Gym, where they showed their health clearance and received a pass to go to their classes.

“All students who will be on campus for any reason will need to complete a daily health screening online via Frontline starting April 5. This includes athletes, students in cohorts, and all students who opted-in for in-person learning,” said Principal Ralph Crame in an email to the students.

In addition to Frontline clearance, students are required to social distance in and out of the classrooms, only eating lunch in designated areas and following arrows to direct foot traffic.

“I really do think the administration did a good job of safely and effectively reopening the school. I understand that a lot of pressure is on them to be as safe as possible, so I appreciate the plan they came up with,” said Jacey Kelly, a senior.

The administration was carefully monitoring the campus and connecting with the students that chose to return to school.

“I really did not know what to expect, but I quickly realized I missed the positive energy the students bring to the campus. It was wonderful to have the opportunity to talk with the students,” Crame said.

The energy Crame notes was apparent to students, as well.

“As of now, being back only one day, I am glad to simply be back on campus. it wasn’t overwhelming, and it was really cool to see life back on campus,” Kelly said.

Per an agreement made with the district teachers, Carlmont is prepared to increase capacity to 50% of the students who opted-in on April 19.

So far, students have given positive feedback about being on campus.

“All the students I spoke with said they had a good day. Some reported being more engaged. Others said it was great to be around each other and teachers again,” Crame said.

After a full year of the campus being empty and numerous debates and meetings about the choice to return to school, Carlmont felt unfamiliar.

“It was very strange [to be back]. It almost felt like I was just visiting,” Hai said.