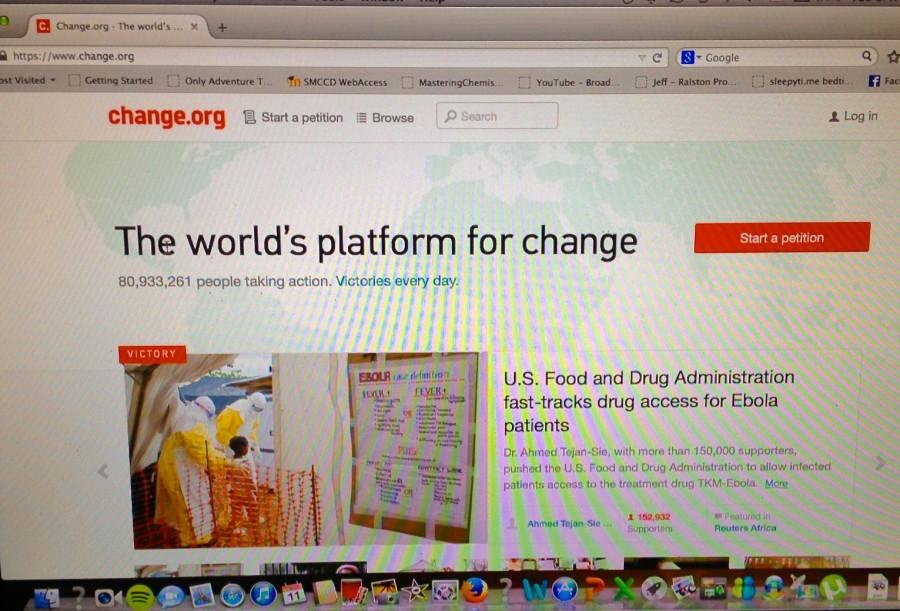 "I was bored one day so I decided to sign stuff on change.org, but I wondered, 'who sees the signatures?'" said freshman Andrew Joo.

The First Amendment gives US citizens the right to petition without fear of prosecution, but how effective are these petitions?

Websites like change.org allow citizens to virtually give their signature on any online petition. Change.org sends an email to the authoritative figure involved, notifying him or her that one more person has signed the petition for change.

According to change.org, “when hundreds or even thousands of people raise their voices about an issue they care about, the message is very hard to ignore.”

Many students at Carlmont have participated in or have strong opinions about online petition websites.

“It depends on the subject, but online petitions are effective because they get the word out to a huge amount of people,” said junior Alexander Chan.

With the increase in the popularity of online petitioning, skepticism arises.

“Internet petitions aren’t effective because many of the websites are scams. Why else would they ask for your email and address? When I signed the petition to get Halloween off for the Giants’ parade, the number of needed signatures kept increasing as the number of acquired signatures increased,” said sophomore Celeste Hsu.

In an interview with The Wire, Clay Johnson, a web organization specialist, stated that Internet petitions are ineffective scams.

“Your petition really isn’t going to get read; the reason organizations try so hard to get you to sign it is that politicians and advocacy groups value your email address over your voice,” Johnson told The Wire.

“I didn’t think it would work, but I signed the one for no school on Halloween because the Giants won and that’s important to people in the Bay Area,” said freshman Matthew Matias.

People will voice their opinions on topics they believe in, but what does it take to achieve change?

“A successful online petition should strive to peacefully protest something upsetting to the general public without attacking someone 0r a group directly,” said sophomore Ashley Wen.

There have been several successful online petitions on change.org, like the Gatorade victory in January 2013. People signed the petition to convince the company to remove the  flame retardant chemical, brominated vegetable oil, from some flavors of their sports drinks. Their success came from their specific request and worldwide response.

Whether it be through online petition websites or through peaceful protests on the streets, it is everyone’s responsibility to promote change in favor of a better tomorrow.