Opinion: Anti-homeless architecture is the pinnacle of stupidity 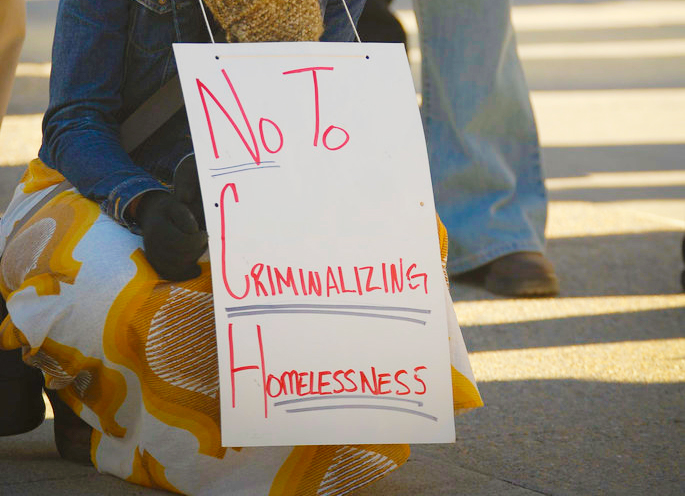 Protesters gather to rally against a law that unfairly targets the homeless population. Photo edited by Chelsea Chang.

Anti-homeless architecture is one of the top three most stupid things in the world, falling short only to Elon Musk and people who dislike “Pokémon.”

A form of hostile and exclusionary design, anti-homeless architecture comes in many shapes and sizes. Some are more obvious, like large spikes under bridges; others are subtle, taking the form of additional armrests planted in the middle of a long public bench. Regardless of its appearance, its malicious intentions and effects remain the same.

However, anti-homeless architecture has its avid supporters as it appeals to the stainless image of peace and order. But when placed under any degree of scrutiny, it fails to hold up.

An illogical, faux solution, anti-homeless architecture’s frail rationality can be demonstrated through other terms. Let’s take polar bears, for instance.

So, polar bears are going extinct due to global warming exacerbated by human activity. Naturally, people reason that the polar bears are too lazy to support themselves. After all, why can’t they find a home when brown bears can? Since these polar bears no longer have the ice needed for ample shelter, they are forced to encroach on human settlements.

Unfortunately, people do not like this. The polar bears are an eyesore and an unwelcome reminder of the very problem that the people have created. The townsfolk decide to spray polar bear repellent around their town. However, they do absolutely nothing to address the root cause of this issue: global warming exacerbated by human activity.

This “solution” seems a bit backward and short-sighted, doesn’t it?

Congrats; you now have a better understanding of anti-homeless architecture than the politicians that continue to push it!

Punishing people without homes for merely existing while refusing to invest in a solution that addresses the root cause does nothing to help combat rising poverty rates; it only makes conditions worse for those affected by it.

Not only is anti-homeless architecture an immoral deterrent, but it also dehumanizes those living in poverty. It lends itself to the myth that poverty and welfare are synonymous with laziness, even though this myth has been disproved time after time.

Still, even if that were true, it wouldn’t boost the morality of anti-homeless architecture. Are people without housing undeserving of basic human rights? Should we deny people the right to adequate housing simply because they don’t meet capitalism’s ideal of an exploitable worker?

Absolutely not — the value of human life doesn’t change whether or not an individual has shelter.

Furthermore, we shouldn’t punish a collective group for the actions of a few, nor should we assume that a minority represents a majority. It’s discriminatory when this applies to marginalized groups, and it’s no different for those in poverty.

According to the Coalition for the Homeless, permanent supportive housing has been shown to consistently reduce homelessness and is less expensive than shelter and other institutional care. Through this method that merges affordable housing assistance with voluntary support services, the number of chronically homeless people will decrease and funds can be used more efficiently.