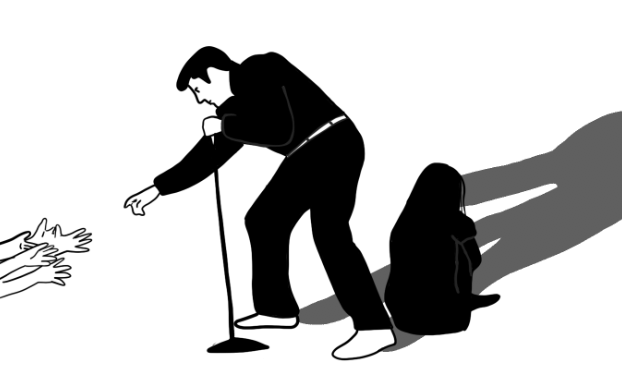 Elvis' fame overshadows his questionable morals regarding his relationship with a 14-year-old.

When I think of Elvis Presley, I think about how he was the King of Rock and Roll, how he broke the 1950s conservative standards of dance, and of course, his signature hairstyle. Little did I know that the same Elvis Presley that people idolize for his music made questionable decisions regarding his relationships.

Elvis’ wife, Priscilla, was only 14 years old when she met 24-year-old Elvis. During her relationship with the singer, Priscilla was molded into what she described as “Elvis’ living doll.”

This is just one of many instances of a celebrity doing something of questionable morals, and more often than not, these kinds of things are swept under the rug.

Even when celebrities are criticized for doing something bad, the general public seems to get amnesia once it blows over.

For example, take Chris Brown. After abusing Rhianna, he dipped in popularity but recently gained more of a following. “Go Crazy,” a song by Brown and rapper Young Thug, was released on July 17 and has over 185 million listens on Spotify.

Once a scandal is no longer relevant, no one seems to care about it anymore, but it’s important to be conscious of who we are giving a platform.

Even if a celebrity is unproblematic, that doesn’t mean people idolize them. The general public sees whatever the celebrities’ publicist team wants us to see, so no one knows who they really are.

A celebrity is unproblematic until they’re not.

There have been countless times when everyone has had a relatively good opinion about a celebrity, and then all of a sudden, they get caught up in a scandal. Everyone who idolized this celebrity would see it as out of character, but in reality, no one truly knows what is in character.

We need to stop idolizing these people that we don’t really know and start paying attention to more important things. The media is flooded with article after article of celebrity gossip when we could be using those platforms to spread awareness about world issues or new scientific discoveries.

“Elvis has left the building,” and it’s time for other celebrities to follow him out. They will always have some level of influence, but it’s time to stop turning a blind eye to their misdoings.