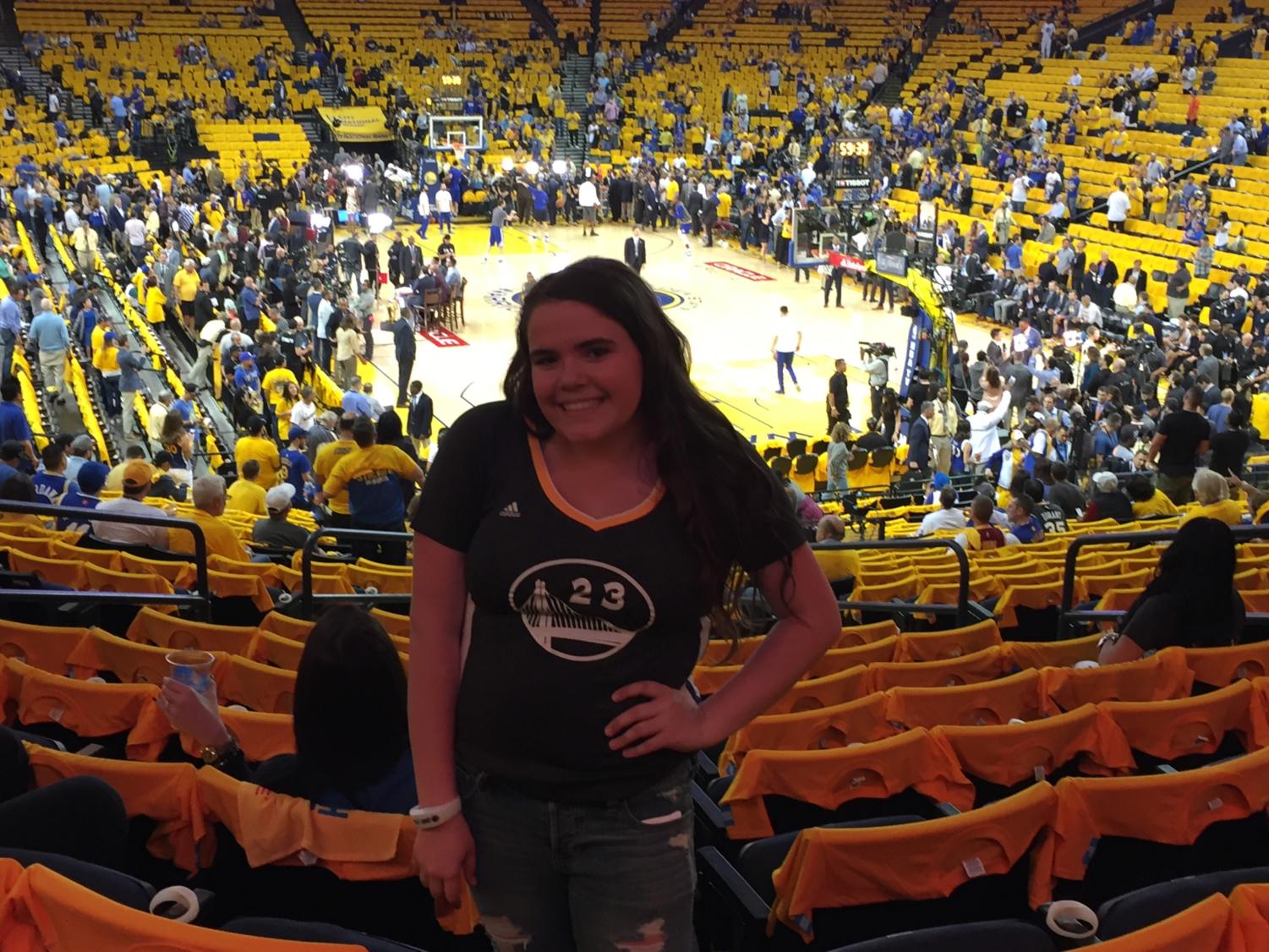 A photo of me (Lizzy Hall) at Oracle Arena, which was filled with fans dressed in blue and yellow during the 2017 NBA Finals.

Since 1971, the Golden State Warriors have been playing at Oracle Arena.

This venue is located in Oakland, a city often referred to as the Town, which is 8 miles away from San Francisco.

For decades, the Warriors have used these locker rooms, squared off against opponents on these courts, and played off the energy produced by the fans that fill these seats.

Nicknamed “Roaracle” for the volume of spectators’ cheers, especially during the 2015 NBA Championship, the stadium has been noted as the loudest arena in the NBA.

Fans of Golden State went through seasons with 23-43 records. They watched their best player at the time, Monte Ellis, get traded. They experienced more frequent turnover in the front office.

Yet, the fans and the city of Oakland held the team together. Their support gave the players hope, even through the difficult times.

On November 11, 2009, five months after he was drafted by Golden State, Stephen Curry tweeted: “Promise to all the Warrior fans…we will figure this thing out…if it’s the last thing we do we will figure it out.”

At this point in the season, the Warriors were 2-5 and had just lost to the subpar Indiana Pacers, who went on a 32-50 season.

And, although, the results were not immediate, as the Warriors finished just 26-56 for the season, Curry ended up fulfilling his promise.

In San Francisco, at the Chase Center, it will not be the same.

Rumors started to circulate in 2012 about the Warriors building a new arena in San Francisco, however the ground was not broken for the property until Jan. 17, 2017.

The Chase Center will cost approximately $1 billion and is entirely privately funded. Also in order to pay for this arena, the team will raise the ticket prices.

The increase in ticket prices and the new location will prevent longtime fans from attending games and cheering on their favorite players from the stands. The people that stuck it out during the 23-43 seasons and believed in the team no matter what will be replaced by rich bandwagoners from Silicon Valley.

For now, the move to the Chase Center will work. The seats will be filled, the spectators will be dressed in blue and yellow, and the season tickets will have a waitlist of 30,000 people or more.

But what will happen when the Warriors lose their star players, Steve Kerr eventually retires, and the team stops making the playoffs every season?

That is when the seats at Chase Center will be empty.

These fans aren’t loyal and they aren’t dedicated to this team.  They were not there when the Warriors did not make the finals every season and were constantly being forced to rebuild their roster.

Oracle may have narrow corridors, few dining options, a large scoreboard in center court obstructing the view from the upper deck, old seats, and a little foyer, but it had character. This character and sense of community can never be replicated.

Oracle was a home and the fans were a family that supported their team no matter what.