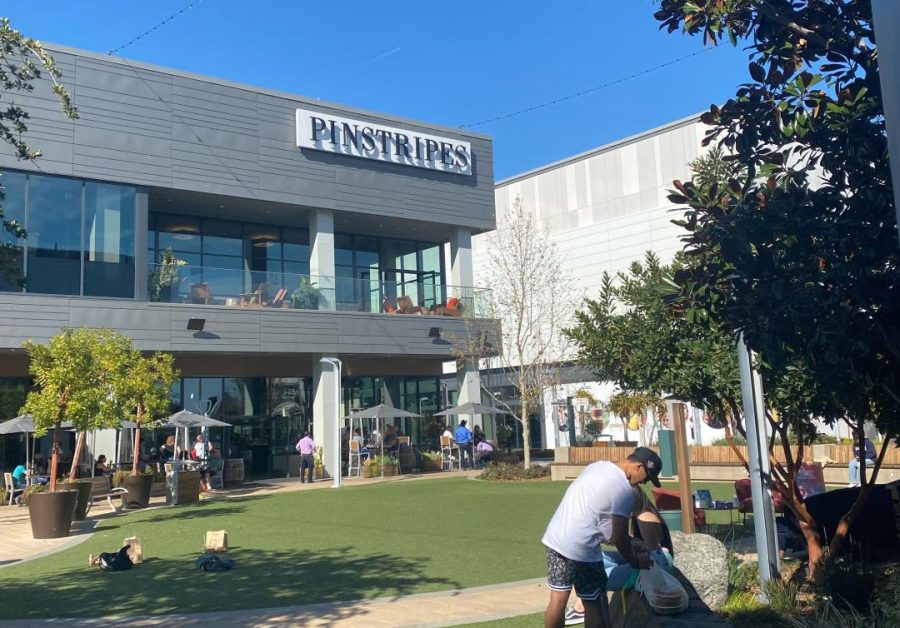 The newly renovated exterior of Hillsdale Mall. Pictured is Pinstripes, a joint bowling and dining establishment.

This phenomenon known as the mall has been a staple in towns across the world since the 1950s. Attendees ranging from middle school to the elderly flocking to malls in massive numbers for some good, old-fashioned retail therapy. At least, that was how it used to be.

Recently, mall attendance has been on a steep decline. Malls have been dying out, and to curb this, some shopping centers have undergone renovations. One example of this is the Hillsdale Mall in San Mateo, California. Along with modernization, the mall has also tried to transform itself into a more luxury experience. However, the sharp contrast between the new outdoor mall area and the older indoor section makes shopping at Hillsdale confusing and non-cohesive. The more modern zone feels like a forced attempt at drawing more foot traffic to the mall.

One common problem for shopping malls is demographic changes. This can be seen in the Cloverleaf Mall, which closed due to a lack of returning customers in the 1990s. Women, who were the main customers, began to not return after an influx of young people began attending. This example acts as a warning of what could happen to places if their main demographic changes too suddenly.

In the case of Hillsdale, the introduction of more luxury stores could have the effect of driving away the central customer base. San Mateo’s median household income is around $124,000 dollars, according to the U.S. Census. Therefore, Hillsdale’s main consumer base is made up of people who have similar incomes to that. Rapid change of the stores at Hillsdale from moderately priced to more luxurious could have the potential to drive these consumers away. Customers could choose to go to other moderately priced malls such as The Shops At Tanforan in San Bruno. While the argument that an increase in luxury stores will bring in wealthier customers can be made, the fact of the matter is that wealthier consumers already have options closer to them.

Stanford Mall in Palo Alto can be seen as a prime example of this. The mall is outside and made up of almost entirely luxury stores. However, this works for Stanford due to the central demographic being wealthier consumers. According to the U.S. Census, the average household income in Palo Alto is about $158,000. Due to this, Stanford Mall is generally seen as successful, at least compared to other malls. However, because of its lack of accessibility, wealthier consumers don’t have any incentive to drive the 30 minutes to Hillsdale to shop. Stanford Mall is convenient, so why would they go anywhere else?

Lack of attendance is a problem for shopping centers, but only going through renovations fails to address the root of the problem; convenience. The internet has made online shopping the most convenient way for the mass majority of people to spend their money, In 2021 alone, $4.9 trillion was spent online shopping. Another factor to add to online shopping’s appeal is its safety. The risk of contracting a disease like COVID-19 is greatly lessened by choosing to shop from home. Going out in a public area like a mall makes coming down with a disease easier due to more exposure to others.

The lack of convenience in malls has contributed heavily to their decline, but renovations aren’t increasing their appeal.