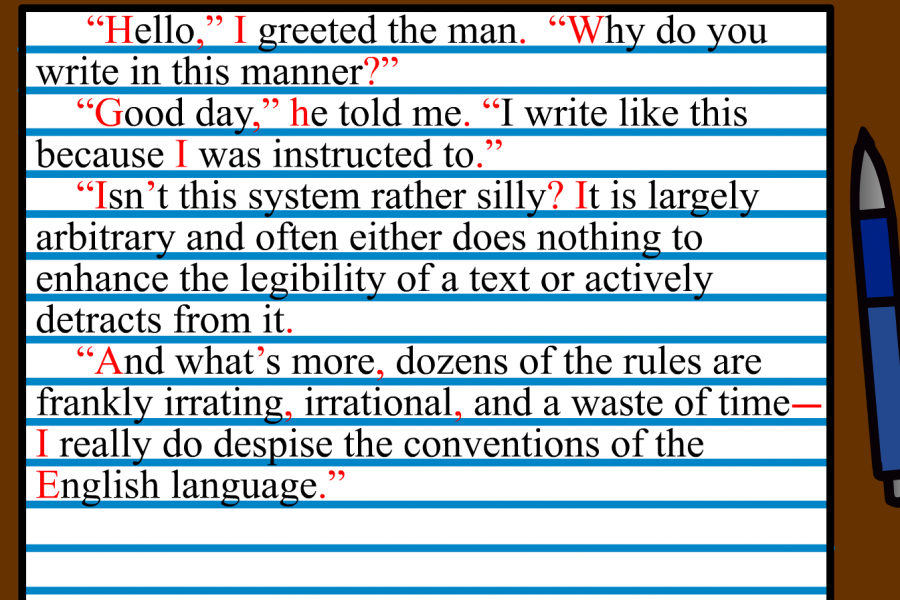 English punctuation has to be taught extensively in schools. Reforming it would make teaching and learning it easier and more systematic, and well as easier to understand.

The English language is full of its quirks and idiosyncrasies. While our odd spelling and pronunciation get lots of attention, our punctuation tends to get sidelined in favor of them. But I am here to tell you that there is plenty wrong with the English system of punctuation.

On the subject of capitalization, the pronoun “I” should not be capitalized unless it is in one of the other circumstances a word-initial letter should be capitalized. There is utterly no reason for it, and it’s just confusing for people learning to write.

Despite my editor’s disagreement with me, brackets should absolutely be kept around ellipses that are intended to mark where words from a direct quote have been removed. In some circumstances, it’s impossible to tell whether there is a redaction in the statement or if the author was just feeling quirky and whimsical and decided to ascribe a certain tone to the quote. (As an aside, I also hate when writers do this, it deprives the quote of any gravity and makes it feel flighty and trivial.) It should be completely unambiguous to a reader whether a direct quote has been edited. To make it otherwise is irresponsible at best and outright dishonest at worse.

I despise the order of parenthetical punctuation marks. I understand the need for clarity with a regular bracket in certain circumstances, especially in mathematics, but the squiggly bracket has no place in a decent person’s life. They are undoubtedly the mark of the devil and completely impossible to reproduce consistently by hand. They bring me so much disgust that every time I see one, I can no longer focus on the content and instead am reduced to unholy wailing about their sheer repulsiveness.

The lack of an oxford comma is a relic of a bygone era where editors were too cheap to print a single minuscule extra character with their printing press to provide clarity to their readers. I absolutely despise punctuation patterns that actively confuse readers.

Dashes cause so much strife and discord in punctuation, mostly because there are wildly differing systems, none of which are widely accepted. The best solution is for hyphens to be used only for splitting words, such as x-ray or co-op, or when a word is split along two line. In all other circumstances where a hyphen would be used, en dashes should replace them.

Section symbols are a truly useful invention that are not used frequently enough, but only the regular section symbol (§): no stupid ivy leaves or series of asterisks or other dandy, frivolous nonsense. Little doodles have no place in writing.

One little-used punctuation mark that is technically present in English but not nearly as widespread as it should be is the interrobang. A combination of the question mark and exclamation point, it’s the perfect combo to express my shock and rage all in one. I’m thoroughly disappointed it doesn’t have more reach.

One of the few things that does please me about English punctuation is that we use quotation marks and not the horror of guillemets like some languages (French, I’m looking at you). Guillemets are terrible to type nicely: either you have to memorize an alt code just to include a quote or you have to use a greater than and less than symbol, which is the least aesthetically pleasing form of punctuation known to man. Grow up and use quotation marks.

A useless convention that has developed in English is that, for some godforsaken reason, formal writing forbids the use of multiple punctuation marks in a row. Why can’t we have multiple? Some greedy grammar man hoards them all, apparently, and we’re rationed to one ending for a clause or sentence. But this is silly. I have a burning need to indicate, for example, that a quote has been said with an exclamatory tone and is also the end of the sentence. For example: “He said, ‘What?’; I yelled, “No!’.”

On top of that, punctuation at the end of the quote should only exist within the quotation mark if it was actually contained within the quote. If your quote is a single word but at the end of an external sentence, for the love of all that is good and holy, the period should be able to go after the quotation marks. For example: “He claimed the boat was too ‘big’.” Big is not a sentence, and therefore should not be punctuated as such.

Such changes as these would make writing in English a much more pleasant experience and help reduce the true mess of a language English exists as in its present state.