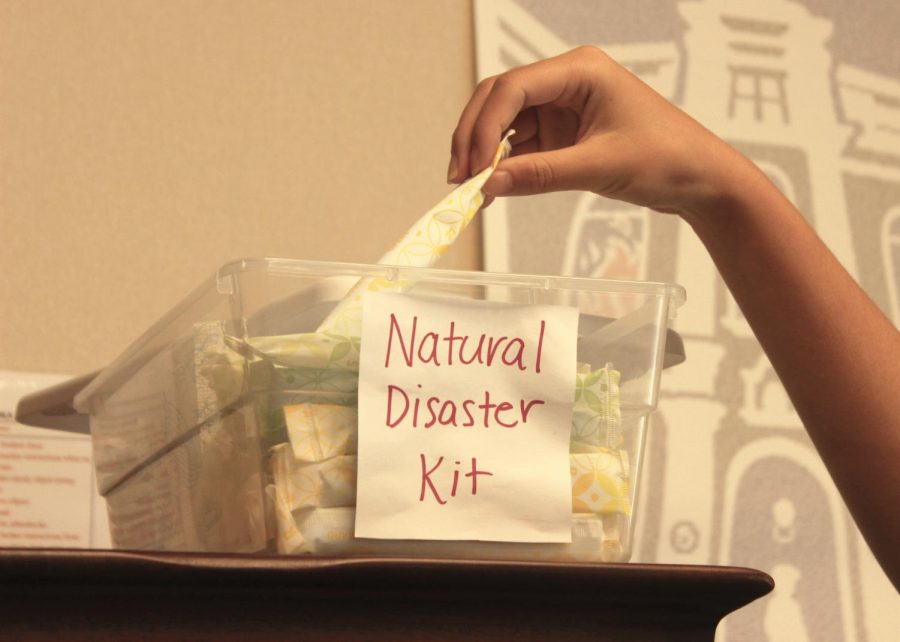 "Natural Disaster Kits" can be found in some classes around Carlmont.

Transparent boxes labeled as “Natural Disaster Kits” can be found in some classrooms at Carlmont. But the real disaster is the fact that Carlmont thinks this turn of phrase is enough to mask the situation at hand.

The school should have period products in the bathrooms, not in a euphemized plastic box at the center of our classrooms.

When beginning my investigation into this issue, I asked one of my teachers where they got the Natural Disaster Kits; they told me that fellow teacher Jamie Abdilla charitably created and refills these boxes. When asking for more information, I found out that a survey was sent to the teachers in 2019 asking if they would want a Natural Disaster Kit in their rooms. I don’t see why this should have been an option for teachers, especially after seeing how many teachers declined. I have been learning in person at Carlmont for three years, and I have only seen six of my 26 teachers have this kit in class. I am lucky to be in a class with one of these boxes, but what about all the other students who don’t share this same luck?

To add to the lack of usage, if a teacher has the box, they unironically put it in the worst possible spot in their classroom. I have seen some under their desks, which forces students to ask their teacher to get it for them in a possibly humiliating interaction. My favorite spot that I have seen a Natural Disaster Kit is on top of the Smartboard, and my teacher needed a ladder to reach it.

There is also the option to get something from the office, but that isn’t always accessible; you run into the awkwardness of telling an administrator you are on your period. Also, I know that most classes are pretty far from the office, which adds to the problem.

Some may argue that “you should bring your own products to school;” while that could be true, I have had my period long enough to know that you are never sure when it’s going to arrive. You can’t always be prepared.

Even if a student was prepared, I have heard many stories where teachers don’t allow anyone to leave class during a lecture. I have had countless awkward interactions with my male teachers explaining that I am trying not to bleed on their chair. Not a highlight of my high school career.

In coming up with this piece, I talked to many students at Carlmont about this, and I have found that it is a pretty universal experience. Yes, even the part about bleeding on a chair.

So this is where I raise two essential questions: why are there no products in the bathroom? And where is the funding to provide them?

I had brought up both these issues over the summer with a former student, Maya Litvak. She told me that she spent her junior and senior years advocating for a better system for distributing these products almost three years ago. Litvak and another student, Jenelle Kwofie, worked on a presentation they showed to Mr. Crame, Mr. Stuenenberg, and former Superintendent Mary Streshly. This presentation included testimonies from other students and personal anecdotes to prove that the products need to be reinstated at Carlmont.

After the presentation, according to Litvak, the school said there would be a change in how the school dispensed these products. When Litvak questioned the administration about where the funding was, she said they gave some understandable reasons.

“The school said there was funding for these products, but they had stopped putting the products in the dispensers because back in the 1980’s students would steal the products and vandalize the school with them,” Litvak said, adding that students also left products on the floor or flushed them down the toilet.

The school’s solution was just not to have these products at the will of the students. In response to this, the girls offered the idea of adding more trash cans in the bathrooms, and it seemed as though the school had taken this suggestion; I have noticed this increase since my freshman year.

Since other schools, such as Menlo-Atherton and Sequoia, have dispensers in the bathroom, Carlmont should also have the means to support this. Since I was told that these kits were voluntary work and not set up by the school, there should be funding floating around, but it’s unclear where it is.

To figure this last part out, I questioned Litvak about whether she had ever brought up the issue of where the funding was with the administration. This was when she told me about her interview with Streshly, where she found out some crucial information.

“Streshly told me that Carlmont has had funding for years and they didn’t even know that Carlmont wasn’t using their funding. So I told the Carlmont administration because they had told me their main concern was that they wouldn’t have enough funding and resources,” Litvak said.

Litvak also said something that struck my interest. She told me that the school told her that they were going to be instating a new system for the following years during the summer.

This “new solution” must be the Natural Disaster Kits, since this is the only thing I have seen change, even though they aren’t a valid solution for two main reasons. Students don’t feel comfortable asking their teachers for these products and shouldn’t be forced to like they are now. And, not all teachers even have the kits in their classrooms.

Carlmont should return to putting period products in the bathrooms, where they belong.