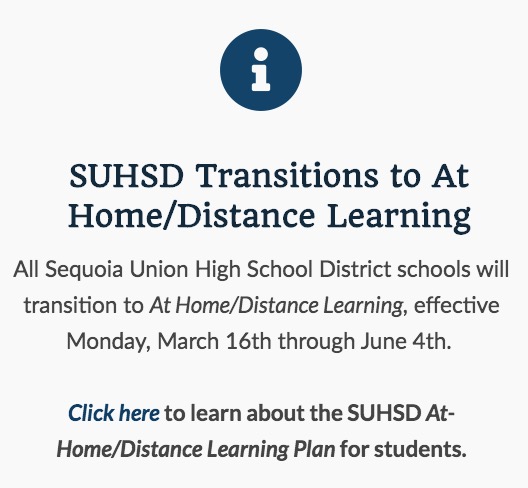 The Sequoia Union High School District’s homepage announces the switch to distance learning. However, the grading during this time period is still uncertain.

Superintendent Mary Streshly said it best; COVID-19 is not a hurricane. In the school board meeting held on Zoom on April 6, the nature of the COVID-19 pandemic was described as a different kind of natural disaster — a silent one.

Perhaps it is the noiselessness that has caught us off guard. The district is no stranger to dealing with natural disruptions to school. Over the years, we have seen school closures and modified learning methods to combat nature.

But this time is different; unlike a power outage or even a fire, it’s impossible to see or define the extent to which the virus impacts an individual. With COVID-19, we are all either fighting the virus or running from it, and each scenario has massive life disruptions.

For many of the families in the Sequoia Union High School District (SUHSD), that comes in the form of the shelter in place. In one way or another, we all are affected.

Palo Alto Unified School District (PAUSD) recognized this reality when they announced the change to their grading system — the adoption of a credit/no credit system. It’s time that SUHSD does the same.

The argument to maintain the current grading system comes from a place of privilege. While some students may have found the adjustment to distance learning manageable, for many students, the transition has impacted their ability to perform academically. This includes the students with poor wifi access, who have to share a device with family members, and who may be in a home environment that’s difficult to work in.

Regardless of socioeconomic background, which is an important factor to consider, the learning environment has been fundamentally changed for every student. Those who have been able to cope with the transition and who have not struggled at all in the process are in the minority.

Even the mechanisms put in place by the district to minimize socioeconomic disparity have proven to be insufficient. In the school board meeting held on Zoom on April 6, an attendee attempted to speak and was unintelligible seemingly due to poor network connection. She later said that she was using a district device.

While a student’s socioeconomic background is a prominent factor, it’s not the only reason a student’s performance may be altered as a result of distance learning.

Practically speaking, online courses are by no means replications of physical classes. Teachers have done an outstanding job converting as much of their curriculum as possible to the online system and supporting students through this process that they themselves are still figuring out. But even so, the environment has fundamentally changed.

Hard work can be easily replaced by a Google search, and there is no way to accurately distinguish between the two. This is why most tests, notably AP tests, are becoming open-note. A student may pride themselves on maintaining their own academic integrity, but there is even less of a guarantee than usual that their peers are doing the same.

This is not to say that students should give up or that their hard work was for nothing. Rather, students need to find personal reward in their efforts without some form of external gratification.

In some ways, this reality better prepares high schoolers for the world we are about to face; people are not always recognized for their personal exertions, especially in times of economic uncertainty. Ultimately, it is an intrinsic source of motivation that pushes people to be their best. Students should take pride in their work, not their grades.

Many students are concerned about one of the reasons their grades do matter: college admissions. Yet they forget that even without an international pandemic, colleges always take an applicant’s high school into account. The contexts of class availability and grade distribution are always key to maintaining a fair admissions process. In turn, the UC and CSU systems have already announced their modification of admissions criteria for the fall of 2021.

It is inevitable that other institutions will follow suit.

If an entire school has a credit/no credit system, colleges must acknowledge that, no matter what state they’re in or if they’re public or private. Some GPAs will include the Spring 2020 semester, others will not. Other districts are likely to follow PAUSD and, as this becomes more popular, it will be harder and harder for colleges to penalize applicants from one high school.

If you really want to talk about the impacts of COVID-19 on the college admission process, you need to be thinking from an economic perspective. The students that will attend college next year will be the students who can afford to, and that number will decrease as the international economic situation worsens. That’s a different article entirely, but it’s something to take into account. We are entering an economic crisis; therefore, a student’s report card may not be the primary factor that determines the college they attend.

Ultimately, however, many of our concerns about the future are guided by what-ifs. We should be concerned about the present. What is presently at stake, is the means by which academic progress is measured given the realities of distance learning. The fairest and most accurate way to measure such achievement is through a credit/no credit system.

According to Streshly’s statement via the district website, “a recommendation on grading will not be made to the Board until the April 15th Board Meeting.” You can see the district’s current policies on distance learning by clicking here.