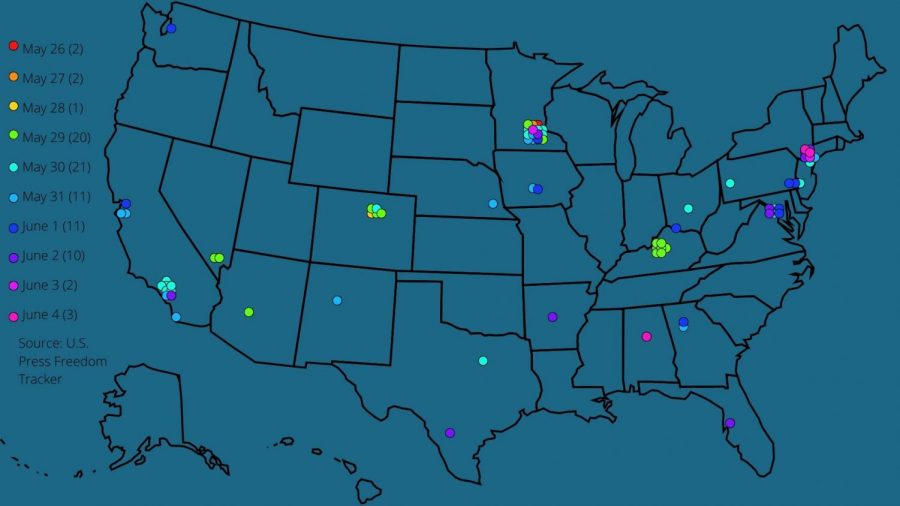 Across the country, covering protests is a dangerous task for journalists. Each dot on this map represents a journalist who was arrested or attacked at a protest between May 26 and June 4.

Omar Jimenez, a CNN correspondent, was arrested on May 29 in Minneapolis.

On the same day, a rubber bullet struck photographer Linda Tirado in the face, leaving her permanently blind in one eye.

On May 30, Barbara Davidson, another photographer, tripped and hit her head on a fire hydrant after a police officer shoved her in the back.

These are just three instances of journalists being attacked or arrested while covering protests responding to the death of George Floyd. Many have documented their incidents on Twitter; some were still attacked despite identifying themselves as press.

As a student journalist, I had to ask myself: should I cover protests? At first, I thought doing so would be necessary to give my audience a unique perspective. After all, I would only be at the protest to collect the information I needed to tell the story, and there would be no reason for me to get into trouble. However, as the week went on, I saw more stories similar to those of Jimenez, Tirado, and Davidson; police and protesters alike were attacking journalists.

It broke my heart to see that people were attacking journalists for doing their jobs, especially since their coverage is protected under numerous laws, including the First Amendment’s freedom of the press.

I eventually decided that covering protests would not be in my best interest. The story is important, but my safety comes first; if I get attacked while collecting information, the story cannot be told.

To me, one of the core values of journalism is the ability to give readers an objective view of what is happening. This type of view lets readers use a bias-free source to form opinions. However, objectivity cannot occur if journalists are being attacked for their coverage. The story then takes on a new purpose: instead of telling the story of the protest, it tells the story of the journalist.

Another important aspect of journalism is reporting accurate information. Accuracy is especially important as we navigate an age where misinformation can spread easily through social media. Sources often have conflicting information, and readers need the truth to make informed decisions about what they believe and what they will do about their beliefs.

However, not everyone may like the information that is presented in journalistic work. Maybe it goes against a reader’s beliefs or is presented in a way that’s difficult to comprehend. As a result, people may not trust journalists with handling the truth because they don’t like what they are reading.

One such person is President Donald Trump, who has denounced “the Lamestream Media” various times on Twitter. He claims that journalists perpetuate the spread of fake news, and often targets news outlets such as CNN and NBC. On May 31, Trump tweeted about the media again.

The rhetoric in this tweet is harmful to journalists and the general public alike, as it implies that journalists don’t care about their audience. In fact, the opposite is true; journalistic ethics exist to ensure that readers are getting accurate and relevant information. It is a journalist’s duty to serve the people and provide reliable coverage of an issue.

On May 30, journalist Lexis-Olivier Ray was hit in the stomach by a police officer in Los Angeles. He described that day as “one of the scariest and most tense days” of his life.

Since that day, Ray has been attending protests and giving followers updates through his Twitter account. He is just one example of how resilient the journalism community can be. Despite his attack, he is still risking his life to inform the people about protests in his area. I applaud him and all of the journalists that are on the frontlines, risking so much to do their jobs.

Now, the truth matters now more than ever, and we need journalists to report the truth. So please, whether you are a police officer or a protester, leave the journalists alone.