Opinion: Planned Parenthood is more than an abortion clinic 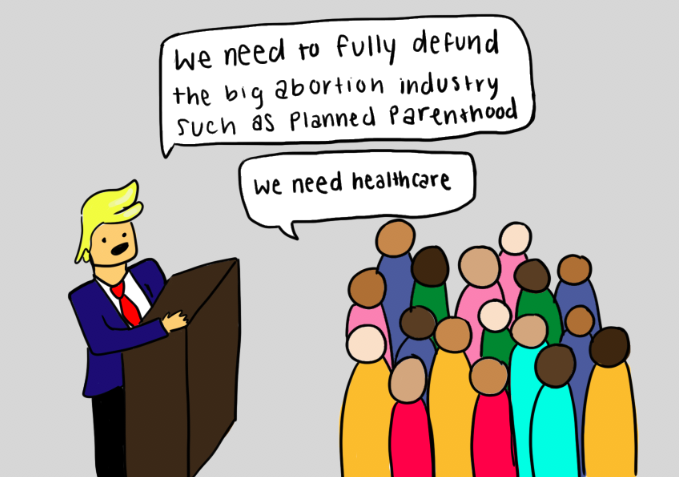 Sure, Starbucks is a coffee shop, but it’s also a place where people study and sit down to read the newspaper. It’s even a place for parents to grab their kids a quick bite to eat before shuttling them over to the next soccer game.

Starbucks offers so much more than just coffee, and Planned Parenthood has so many more important services than just abortion.

Because a third of Planned Parenthood’s revenue comes from taxes, some argue that their tax dollars shouldn’t be used for abortions. However, Planned Parenthood is more than just an abortion clinic. It’s a place where people can get vital health checkups without breaking the bank.

In a letter to pro-life leaders and activists, President Donald Trump urges them to vote for him and promises to “fully defund the big abortion industry such as Planned Parenthood.”

While healthcare isn’t a problem for people in France, Japan, the UK, and many other countries because it’s government-funded, in the U.S., Planned Parenthood is all we’ve got. Since taxes aren’t being used to give U.S. citizens free healthcare, at the very least, tax money can fund Planned Parenthood, a facility that helps people who can’t afford expensive healthcare.

Instead of thinking about how tax money is going into Planned Parenthood, think about how it is actively helping save money by catching medical issues while they’re still manageable.

Although Planned Parenthood performs abortions, they also provide people with important services such as cancer screening, STD testing and treatment, and hormone therapy.

These services are essential and should not be put in jeopardy as a ploy to get more votes. Planned Parenthood has been branded as the bad guy when it helps a lot of people in reality.