Over the past few years, the meaning of the American flag has become less inclusive as people feel like it does not represent them 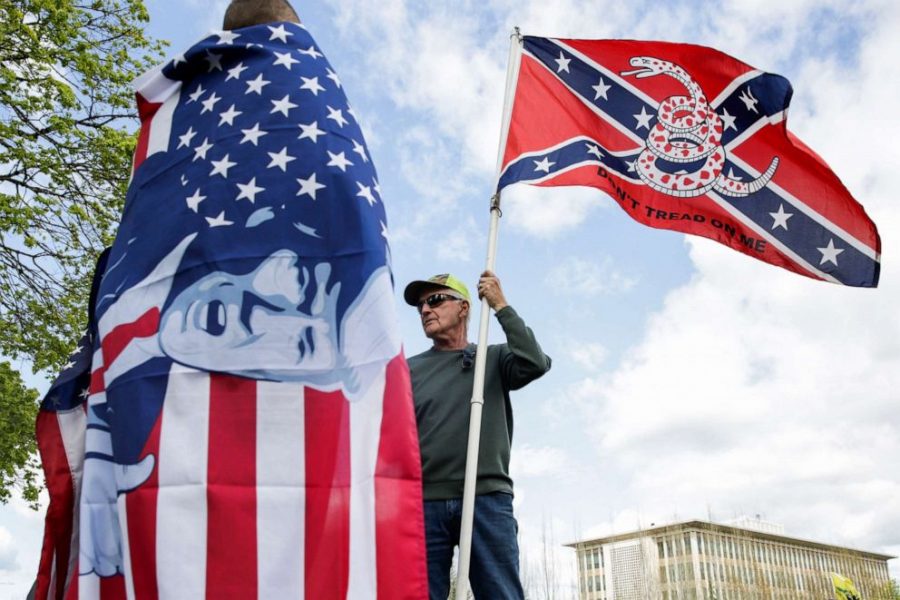 A right-wing protestor holds a flag that combines a Gadsden flag from the American Revolution with a Confederate flag from the Civil War. Though the two symbols, historically, contradict each other, they are now frequently seen together. He talks to another man holding an American Flag with President Trump’s face plastered over it.

Once representative of freedom and unity, the American flag has become a symbol of the political right in recent years. This association with the right has left many feeling unsure if the flag always flies for all Americans.

The American flag made its first appearance at a minor Revolutionary War skirmish in 1777. A few months before this battle, on June 14, the Congressional Congress passed the Flag Act of 1777, making the Stars and Stripes the official flag of the U.S.

Throughout time, America and its flag have always moved forward, striving to do better. We may not have had a perfect past; however, seeking to do better and progress forward was characterized by the flag. The American flag may not have flown for all people when it first flew, but it strives to.

But in recent years, people who have flown the flag for decades have had mixed feelings about what it represents.

“I had always flown a flag, but in 2020, after I had retired from the Navy, I took it down. This year I began to see people flying an American flag with President Trump’s image over the flag, and it greatly offended me,” Dan Brune said.

Brune is a graduate of the U.S. Naval Academy and served 30 years of active duty in the Navy before retiring as a Navy Captain.

“And I, at that point, realized that even though I had defended the Constitution of the United States and sworn to defend it for 34 years, I thought the flag did not represent my beliefs anymore. I thought it had become overly politicized and almost nationalistic instead of patriotic,” Brune said.

In President Trump’s America, the flag has yet again become a source of controversy. People have begun to wrap themselves and their views in the flag, calling it ‘patriotism.’ In actuality, it is nationalism shrouded in so-called patriotism.

Though nationalism and patriotism are often confused and commonly regarded as synonyms, they are quite different. Nationalism is the belief that one’s country is better than all other nations, while patriotism is pride in one’s country. Patriotism is quite harmless, while nationalism can be detrimental; the latter is often credited as a starting factor in both world wars.

“After seeing the flag with Trump’s image, to me, that made it a political symbol and a symbol of a political party as opposed to a symbol of our country. The flag represents, or should represent, all of us, not half of us.” Brune said.

In America, the alt-right appears to be hijacking the flag’s meaning and turning it into a symbol of nationalism rather than patriotism. The American flag is seen at alt-right rallies flying next to Confederate and Nazi flags, while historically, in World War II and the Civil War, America has fought on the opposing side. This has created mixed feelings for many Americans flying their flags, as many feel as if neo-nazis and white supremacists’ ideologies have altered the flag’s meaning.

This is not the first time a political group has hijacked the meaning of a flag. For instance, in 2009, the Tea Party, a right-wing movement that believed in lowering taxes and limited government, adopted the Gadsden Flag. The Gadsden Flag was widely flown at Tea Party rallies and was used as a protest symbol nationwide, giving it a political connotation.

Before the Tea Party, the flag and its rattlesnake date back to the Revolutionary War, even considered one of the United States’ earliest flags. The flag originates in 1775 from Christopher Gadsden, a general in the American Revolution, who may have been inspired by Benjamin Franklin’s earlier political cartoon usage of the rattlesnake.

The Gadsden or “Don’t Tread on Me” Flag was first used by the Continental Marines as in 1776 it was given to the Commander in chief of the Navy, Esek Hopkins, for use on his flagship to represent on the Navy’s command ship. Later on, it was used as a Naval and Marine Corps symbol to represent tradition, even being flown on warships up to the 1990s.

However, due to the Tea Party’s political nature, the Gadsden Flag is no longer flown by the military and government. The flag is even associated with xenophobia and racism. In a shooting in Las Vegas in 2014, a couple associated with white supremacist groups killed two police officers. They placed a Gadsden flag and a swastika along with a note on the dead bodies before continuing their rampage nearby.

Later, in 2016, the Equal Opportunity Employment Commission (EEOC) issued a preliminary ruling that wearing the Gadsden Flag could be considered racial harassment. The flag had been interpreted to convey racially-tinged messages, and regardless of the historical origins and meaning of the symbol, it could be deemed offensive.

Now that the Gadsden flag has been politicized for over a decade, redemption and recovery back to its original meaning are slim. The flag’s meaning has rusted away and taken on a new one; however, whether the meaning is rusted beyond repair or fixable only time will tell.

The American flag does not have to have the same fate. Its meaning is merely tarnished and can be polished back to its luster of representing us all, rather than only a fraction of Americans.

Under President Trump’s America, the flag’s meaning has been altered from its original purpose, making many uncomfortable flying it. The flag seemingly became a symbol of the political right, making the flag theirs whilst excluding the rest of the country.

Additionally, according to the Washington Post, some Americans have been ashamed of President Trump’s behavior and actions, which worked to dampen their feelings of patriotism and its symbols, such as the American flag.

“The week of the election, I started flying the flag again. And my hope is that the flag can represent all Americans again, as we will hopefully come together,” Brune said.

Others shared Brune’s sentiments; when it became clear that Joe Biden would be the president-elect, people seemed to reclaim the flag. At Biden’s victory celebration, where he was projected as the 2020 president-elect, the flag was flown proudly.

The American flag should not support one political side over another. Instead, it should fly for all Americans as a symbol of pride and unity towards our country’s betterment and progression.