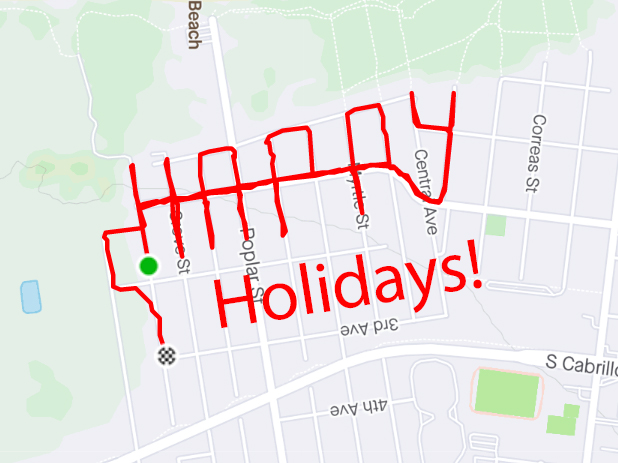 Doing something simple, yet creative such as spelling out letters while exercising is a great way to be humorous and save money at the same time.

Each year, Americans flock to stores during the holiday season to purchase goods inessential to life in unusually high quantities. While most shoppers enter stores with the intent to do good for others, they are unintentionally allowing corporate marketing and advertising to negatively influence the organic tradition of gifting.

Gifting originated as a way to create or strengthen a social connection through a polite gesture in societies long ago, but the tradition has since become an extremely commercialized responsibility.

Contrary to popular belief, it has been shown that this type of obligatory gifting is more damaging than beneficial to the consumers themselves. A 2019 survey conducted by Yelp found that 49% of Americans consider the holiday season to be the most stressful time of the year. In addition to this, the survey found that as many as 29% will be in debt as a direct result of holiday shopping, and it will take them an average of three months to pay it off.

As a result of COVID-19, gift-giving and shopping have become even more problematic for the consumer. Physical stores place visitors in direct exposure to others, and online shopping prevents consumers from trying products they are about to buy, as well as putting workers packaging the products at risk.

Instead of becoming entangled in the world of consumerism, consider looking no further than within the confines of your own house. A simple gesture of appreciation for the people you live with can come in many forms while being more affordable, original, and serving the same purpose as a store-bought gift.

For example, one could show appreciation for their siblings by taking over their chores for a short time. Perhaps several family members could team up to cook something delicious for everyone. One could also opt to complete a long-needed repair of something within the house. Or, you could be like me and spell out “happy” on a run using a GPS tracking app!

The point is, as long as the deed is done mindfully and with good intention, you’re already showing your appreciation for those that care about you. And at the end of the day, what’s going to be more memorable: A fixed leaky faucet that nobody had time to deal with, or a knickknack from the store?

Gifts are nothing by themselves. Instead, they’re part of a more extensive process that creates connections and brings people together. Instead of buying gifts, do something nice for people you care about instead.