Opinion: The era of NBA superteams is over 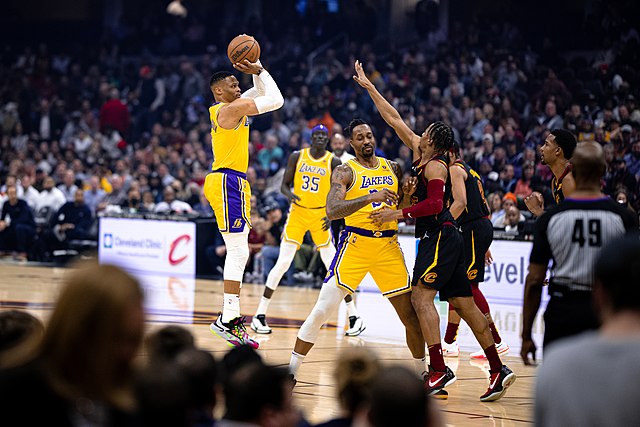 Russell Westbrook, who was acquired by the Lakers, led fans to call the Lakers a superteam. Unfortunately, Westbrook underperformed and the Lakers missed the playoffs.

NBA fans called both of these teams superteams. A superteam is a team with three or more all-star caliber players, with some of those players being among the best in the league. Often, these superteams are formed through trades or players leaving to start a superteam.

The Los Angeles Lakers were led by all-time great LeBron James and had two other all-stars in Anthony Davis and Russell Westbrook. Two years ago, a similar Lakers team won the championship. However, this star-studded team missed the playoffs, a far-fetched result from the lofty expectations before the season started.

The Brooklyn Nets were led by Kevin Durant, one of the best players in the league, and had a supporting cast of Kyrie Irving and James Harden. Harden was later traded for all-star Ben Simmons in the middle of the season. Many fans called them a superteam, and they were a favorite to win it all. Unfortunately, all these talented players failed to win even a playoff game.

Why did these two teams see little success? First off, the third star on each team underperformed relative to expectations. Russell Westbrook on the Lakers looked like a shell of himself and is now considered one of the most overpaid players in the league. James Harden struggled to score the ball, and Ben Simmons skipped playing for the Nets because of injuries.

Second, the star players were not able to play together very much. Due to vaccination issues, Kyrie Irving was only able to play home games for most of the season. LeBron James and Anthony Davis were injured for much of the season. Because of this, the players did not build their chemistry.

Superteams have been around throughout the history of the NBA, and some of them saw lots of success. The most notable example is the 1960s Boston Celtics, which won 11 championships in 13 years while having the most talented team in the league. The 2008 Boston Celtics were able to win a championship led by Kevin Garnett, Ray Allen, and Paul Pierce. In 2010, LeBron James and Chris Bosh teamed up with Dwyane Wade to create a superteam in the Miami Heat that won two championships. In 2017, Kevin Durant joined a Golden State Warriors team that had broken the record for most wins in the regular season with 73 wins. Many consider the 2017 Warriors to be the apex of superteams and felt the Warriors were unbeatable.

However, like the 2022 Brooklyn Nets and the Los Angeles Lakers, other superteams in the past imploded. In 1997, an aging Hakeem Olajuwon, Charles Barkley, and Clyde Drexler teamed up on the Houston Rockets, but they could not make it to the NBA finals and saw their success dwindle in the following years. The 2004 and 2013 Lakers attempted to build superteams centered around Kobe Bryant, but they were disappointments. In 2020, the Los Angeles Clippers tried to build a superteam with Kawhi Leonard and Paul George. This team had championship expectations, but couldn’t even get to the finals.

Building a superteam is not easy, and it takes lots of sacrifices to create one. There only have been a few superteams in the history of the NBA, and many failed to see any real success. When a superteam is built, that team’s future is sacrificed to try and win now.

Soon, NBA teams will realize that building a superteam is not worth the sacrifices most of the time. There is never a guarantee for success, and failures come with years of being a horrible team. Owners will be more hesitant to follow the formula the Lakers and Nets used to build a team: acquiring big names without considering how they would work together.

The Lakers and Nets now have very few draft picks, which are essential for acquiring good young players in the future. Their draft picks were traded away in order to acquire star players like James Harden. In addition, Russell Westbrook and Ben Simmons are now considered some of the most overpaid players in the league. Their contracts mean their values are far lower than the money they earn, which hinders the team in trade prospects and building a prevalent squad in general.

In recent years, many superteams have formed in the NBA. Unfortunately, most of them fizzled out with disappointing seasons. These teams sacrificed their futures and now have nothing to show for their efforts. Superteams can result in championships if done right, but they will most likely result in failure and defeat.