Opinion: The greatest footballer of all time

Who is the better player, between the two greatest footballers of this generation: Lionel Messi or Cristiano Ronaldo? 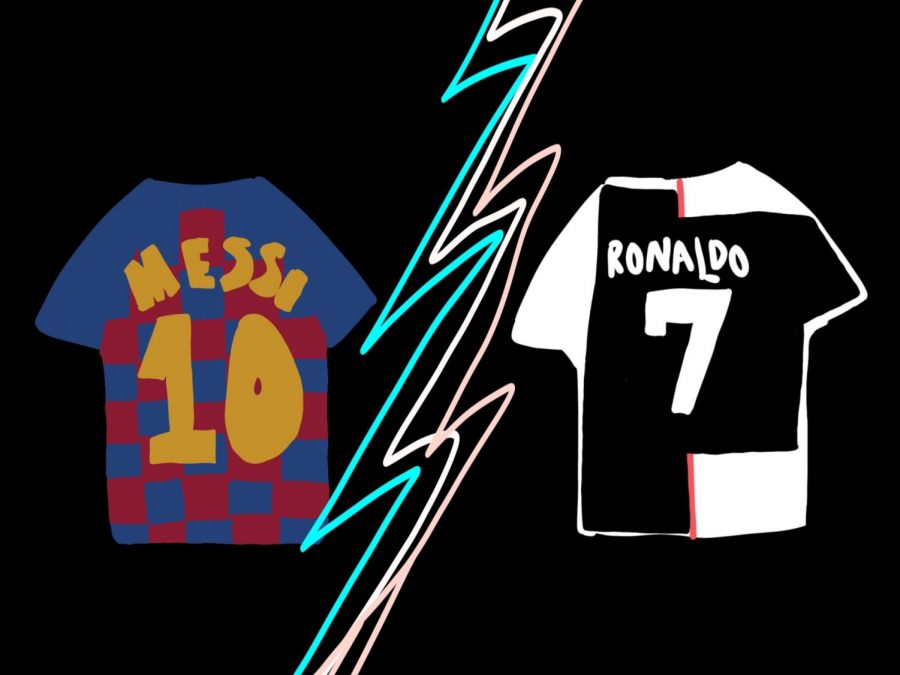 Messi or Ronaldo: who is better? The most discussed question in the football community will be put to the test.

With school canceled, there is plenty of time to tackle one of the most debated topics in the world of football. Not American football, but the sport played with the foot. Who is the GOAT (greatest of all time), Lionel Messi or Cristiano Ronaldo?

For over a decade, these two players have been lighting up the international football world and have become household names across the globe. Because they stood head and shoulders above the rest, Messi and Ronaldo are always compared. Defined in countless ways, the “best player” is never just one.

The greatest player, in my opinion, is the one who I’d put on a team to achieve the greatest success. No doubt put either Ronaldo or Messi on a team, and success would follow. But, who could achieve the most success?

Let’s start with a bit of background about Lionel Messi.

At the young age of 13, the Argentine was recruited to F.C Barcelona (Barca), made his professional debut at 17, and has played for the club ever since. The 32-year-old professional has racked up 627 goals for the team, making him the record goalscorer in Barcelona history. Messi generally plays as a right-winger but is just as prolific as an attacking midfielder or central striker.

With an excellent vision of the game and unmatched dribbling sense, he is equally good at creating chances as he is at finishing them.

Cristiano Ronaldo’s background was a little different. Nonetheless, he remains one of the best.

Ronaldo grew up in Madiera, a small Portuguese island, and joined one of the top Portuguese football clubs, Sporting Lisbon, at age 12. He went on to play across Europe, finding success wherever he went. For club football, he has registered 626 goals in total and became the all-time leading scorer for Real Madrid with 451 goals during his nine seasons there. Now, at age 35, Ronaldo is in his second season at Juventus. He either plays center forward or left-wing.  His outstanding athleticism and technical ability make him a deadly goalscorer.

In my opinion, the greatness of an athlete always begins with the accolades they have earned. Ronaldo has won 32 trophies while Messi has won 35. Although it seems like Messi is objectively the better player, what matters are the competitions where the awards originated.

Here, Ronaldo begins to have the edge over Messi. He has proven himself through Portuguese, English, Spanish, and Italian club teams. Additionally, Ronaldo carried the Portuguese national team to compete multiple times at the UEFA European Championship.

On the other hand, Messi has always been with Barcelona, and it becomes hard to know how he would perform in different leagues. Internationally, Messi is yet to find success. And for many people, that is the deciding factor; Ronaldo seems to be better than Messi because he is a proven winner on any team, rather than with a single club.

“Messi is a fantastic player. It’s like he’s wearing slippers when he controls the ball. But here, for me, is the difference. Messi is a Barcelona player. But Ronaldo could play for Stockport County and score a hat-trick,” said Ronaldo’s former manager, Sir Alex Ferguson, in an interview with the Independent.

However, a player cannot solely be measured in trophy count; the most important factors are their playing style and skill set.

Ronaldo is often associated with a gym, due to his hard work ethic and athletic build. Standing at 6 foot 2 inches, his body is naturally inclined towards building the muscles needed for the sport. Additionally, his mentality during training and games is professional, and he continuously works hard to become the very best.

“He had this amazing determination, that desire to be the best to obsessive levels, topped with an amazing discipline in training,” Ferguson said.

Ronaldo has evolved into a no-nonsense striker and often scores with less than three touches on the ball because he is an expert at heading, lethal with both feet, and has excellent positioning. Despite Ronaldo’s clean techniques and diversity in the clubs he has played for, I still would argue that Messi is the better player.

“Cristiano Ronaldo’s a special player, but Messi’s from another planet,” said Ángel Di María, a former teammate of both Messi and Ronaldo.

Standing at 5 feet 7 inches, Messi is not gifted with Ronaldo’s level of athleticism. Despite this, he can dribble past the best defenders with grace and ease, and slice through defenses to set up a teammate. This understanding of the game earned Messi with the title of being alien at football.

As stated earlier, Messi can be a midfield playmaker or a right-wing attacker. His flexibility in playstyle gives him an advantage over a striker like Ronaldo, as proven in their total goal contributions (goals and assists). Messi has 874 goal contributions while Ronaldo has 818 despite having 118 more club appearances.

In my mind, Messi is the GOAT for that reason. He is more of a team player. He not only creates chances, but he finishes them too. Ronaldo needs teammates to support him, while Messi can make a chance out of nothing by using his unparalleled dribbling talent.

“Messi is the best player ever. What he gets to do is incredible. Messi has just got a bit of everything,” said Wayne Rooney, a former teammate of Ronaldo, in an interview with radio station talkSPORT. “