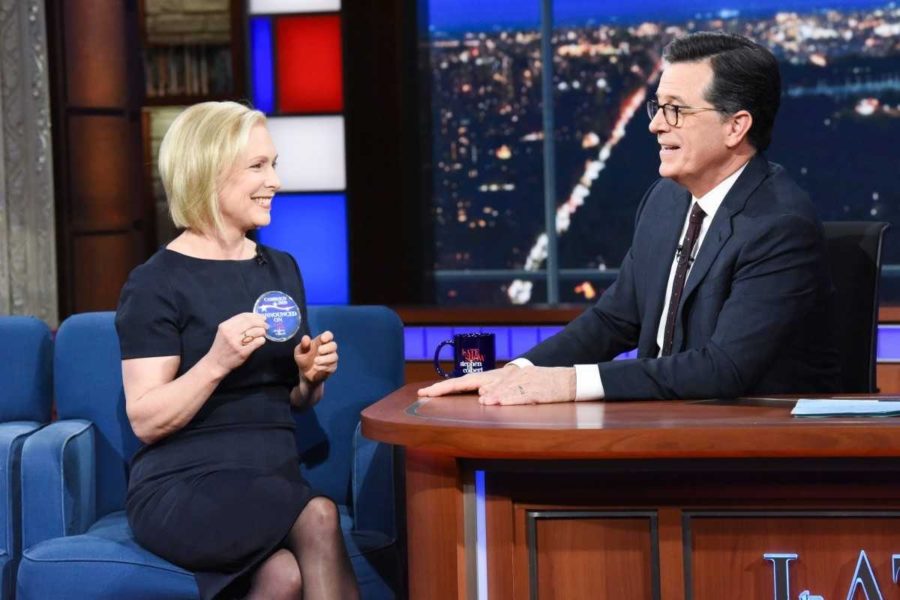 Kirsten Gillibrand announced her entry into the 2020 presidential race on The Late Show With Stephen Colbert, targeting a specific group of potential voters.

Every week, thousands of people log onto Instagram to watch a Congresswoman cook dinner. Instant mac and cheese and tofu curry are only a few of the things she has made on her livestreams. She may not be Gordon Ramsey or Rachael Ray, but people love to watch her cook.

Alexandria Ocasio-Cortez, a freshman Democrat from the House of Representatives, frequently livestreams herself cooking dinner and answering questions from viewers of the livestream. (Think Franklin Delano Roosevelt’s fireside chats, but updated for the twenty-first century).

In addition to these livestreams, Ocasio-Cortez posts Instagram stories throughout the day, giving her followers an update on what she has going on.

What makes Ocasio-Cortez so successful is her sense of authenticity. Instead of being some closed off, far-away figure in Washington, she brings her followers with her on her journey, and she reminds them that holding public office isn’t for elites and career politicians. It can be for anyone.

As the youngest person ever elected to Congress, Ocasio-Cortez has faced an uphill battle, including defeating a longtime incumbent in her primary to get to where she is now. But, her age isn’t necessarily why she is so beloved by liberals on social media. It’s how she is able to capture the attention of her audience.

As candidacies are announced left and right for the 2020 presidential election, these Oval-Office-hopefuls have a lot to learn from people like her.

I’m not just talking about Democrats. Ted Cruz has one of the largest Instagram followings of any Republican politician. In a side-by-side comparison of the two pages, one will notice that Cruz’s largely professionally photographed photos and text cards don’t necessarily lend themselves the same sense of authenticity that Ocasio-Cortez’s account does.

As the field grows more crowded for the presidency, these candidates need to learn who their constituency is how they should really reach them.

Instagram’s demographic is younger, and, more importantly, so is the electorate. Presidential hopefuls should seek not only to gain the support of baby boomers and middle-aged voters, but also they should try to grab the attention of younger voters.

According to an analysis of U.S. Census data from Pew Research Center, millennials are approaching Baby Boomers as America’s largest generation in the electorate.

Pew Research Center also notes that millennials remain far from the largest generational bloc of actual voters; it is one thing to be eligible to vote and another thing to actually cast a ballot.

And let’s face it. At this point in their lives, most baby boomers already have a pretty strong political ideology. The generation of our parents is built of mostly party loyalists; as long as the candidate is from their party, they will get the vote.

But millennials are a bit different.

Millennials are less likely to vote. In 2012, 46 percent of eligible voters turned out for the election, according to Pew Research Center. In 2018, that number rose to 51 percent. Nonetheless, that’s still significantly lower than the overall 61 percent who showed up to the polls.

Candidates should capitalize on the fact that this age group is less likely to vote. By doing that, candidates will spend less energy on the pointless task of swaying voters who most likely won’t change their minds, and more energy building their base out of voters who have yet to take a side.

It isn’t about copying what politicians like Ocasio-Cortez do, but about finding their own brand.

All candidates, no matter what party, need to find their niche to reach potential voters. They need to work smarter and harder.

Kirsten Gillibrand announced her candidacy on The Late Show with Stephen Colbert. Colbert’s show has become a beacon of liberalism since Donald Trump took office, thus able to perfectly paint Gillibrand as a legitimate choice on the ballot for liberals in 2020.

Elizabeth Warren has even brought her dog along to several recent campaign stops, hoping to make herself more accessible to voters, and shortly before Kamala Harris announced her entry into the field, she posted a “Mood Mix” on her social media accounts, telling followers about some of her favorite songs.

These are valiant first efforts, but it’s going to take more than late night television appearances, pets, and playlists to take the white house. Candidates must stay consistent with their efforts, staying vigilant until the very end.

Every four years, we as Americans decide to overthrow our government in hopes that it will make us stronger as a country. We so desperately try to give a makeover to the United States of America in hopes that it will magically solve all of our problems. As nice as it sounds, the jury is still out on whether that actually works.

However, if candidates create authentic messaging and properly engage voters, this next election cycle might actually be the real deal.