People share their opinions on the meaning and the prospect of reaching originality. 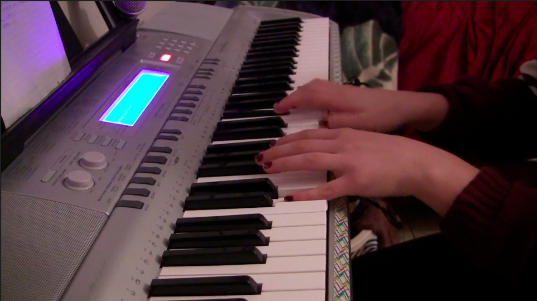 There are only 88 keys on a piano, yet there are an infinite number of ways to combine them.

She sits at her desk, a pen in hand, staring at a blank piece of paper in her notebook. The only thing going through her head is a rhythm and an emotion she’s trying to express with a melody.

As more and more of her vision comes to life on the page, she unconsciously borrows phrases and themes from other music she’s heard in the past and translates their emotion to create her own story.

Carlmont freshman Teresa Vollert, a seemingly average student, does something remarkable when she gets home from school. She creates her own songs and music.

Vollert said, “Music has played a very effective role in my life. It’s a positive way to express myself through the unique sounds I create. It provides me an escape and allows me to let out positive and negative emotions.”

Throughout history, artists have produced incredible and innovative music, but musicians today are constantly being called out for plagiarizing.

Big name music artists such as Taylor Swift, One Direction, and Robin Thicke have all been accused of plagiarizing music and many, including Taylor Swift, have sued other artists for copying their music.

So how could an average 14-year-old produce original music when famous and renowned artists can’t seem to do it themselves?

Vollert said, “I believe that any person who feels driven enough is able to compose or create any form of music originally. I believe that there is a difference between inspiration and plagiarizing. Anyone is capable of using their own personal emotions and they can use their stories to form unique sounds and lyrics.”

Not everyone thinks that music can be original, though.

Sophomore Emma Armstrong, who plays in Carlmont’s concert band, said, “I don’t believe that you can make original music because there is so much music out there that it’s not even possible.”

With so many beats and rhythms already taken, many people, including Armstrong, believe that there is no original sound that can be made, that everything has been used up.

Taylor Swift is currently being sued by R&B singer Jesse Braham for $42 million for allegedly stealing the line “Haters gonna hate,” a short phrase that he is determined to prove he owns the rights to.

Armstrong said, “That’s not okay because anyone could have made that up in their head. It’s just a short phrase.”

Instrumental Music Assistant Director Lieven Smart believes that originality is completely possible, even with the help of inspiration of other artists and composers.

Smart said, “[Making original music] happens all the time. That’s what composition is all about. Taking other music and making it your own is arranging, but orchestrating something that has never been written before is called composing.”

Smart believes that composers get inspiration from everything.

“You could get inspiration from different artists, whether it be the style or the sequence of pitches, and you can steal it and make it your own. Mozart was known for taking how people talked and turning it into pieces,” he said.

People have always been accusing people of plagiarizing; it’s not a new phenomenon. Credence Clearwater and Bob Dylan have all been accused of stealing music.

In the United States, copyright laws are much stricter than in many other countries such as China; however, some genres such as hip hop and pop in the U.S. have frequently been getting away with music “stealing.” But is “stealing” music even possible at all?

Smart said, “I can’t believe hip hop has not been sued like crazy. They blatantly take music from the ’70s, ’80s, and ’90s. They get around it by getting the artist’s permission.”

Jim Jarmusch, an independent filmmaker, said, “Nothing is original. Steal from anywhere that resonates with inspiration or fuels your imagination …  Authenticity is invaluable; originality is non-existent. And don’t bother concealing your thievery — celebrate it if you feel like it.”

Director Kirby Ferguson said during a TED talk, “We have a predisposition to protecting what we feel is ours. We have no such aversion toward copying what other people have because we do that non-stop … Our creativity comes from without, not from within. We are not self-made. We are dependent on one another.”

Ferguson calls this “loss aversion.” Many people, including the director Kirby Ferguson, believe that copying work should not be considered a problem at all and that copyright laws actually restrict creative freedoms, since everything humans have ever created was built upon an idea before it. Whether or not you believe in originality, artists will most likely continue to steal, borrow, and bend to create their own personal meanings with the help of the artists before them.