Overcoming the stigma of sexual education 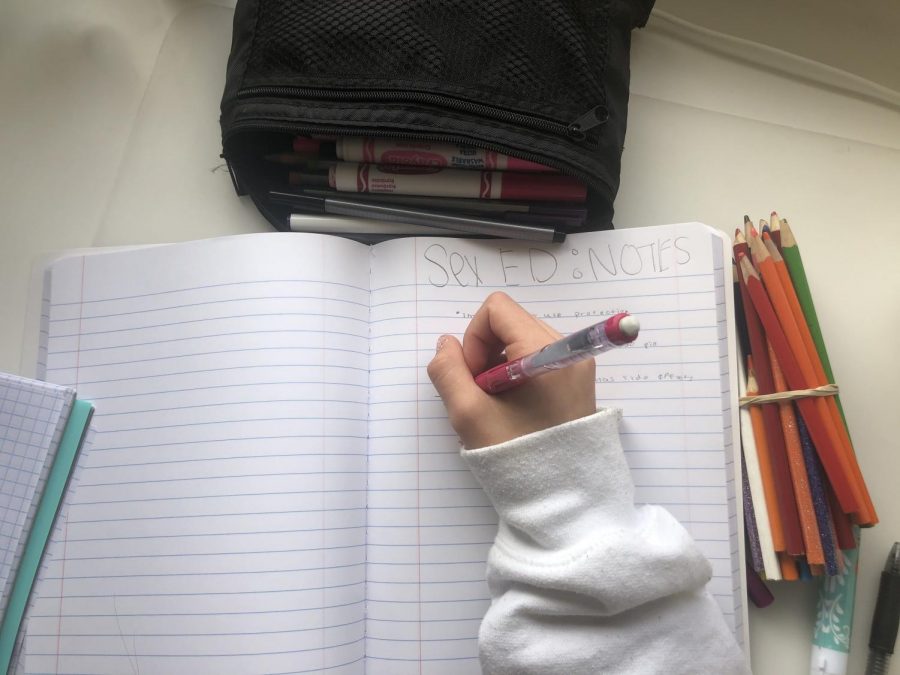 Students in states that mandate sexual education go to class and learn about sex and human anatomy. They take a test at the end of the unit to test their knowledge on the subject matter.

Four out of 10 high school students. That is how many students report having sex. This percentage may seem high, but it is actually at an all-time low.

Every parent worries that their child will make bad decisions that alter their lives forever; teenagers having sex does not escape these worries.

Enter upperclassman Ginny Tam*. Every morning, she wakes up to put on her contacts, which she follows by applying makeup and consuming breakfast. On the surface, she seems average.

However, unlike most American teenagers, her parents are aware of her sexual life and regularly discuss it with her. They have been educating her about sex and sexual anatomy since she was in elementary school. Tam’s parents find educating their daughter essential so she can take necessary precautions when having sex. Tam and her parents claim that this education has not harmed her daily life.

However, sex can still have devastating consequences for most people. Sexually transmitted diseases (STDs) constitute a significant concern. According to a study from the Centers for Disease Control and Prevention (CDC), teenagers between the age of 15 years old and 19 years old are more likely to contract an STD than adults; teens have less access to STD prevention methods and are concerned about the confidentiality of getting tested and treated.

Another subject of the fear surrounding sex is teen pregnancy. Pregnancy is a considerable risk, especially for low-income families who cannot afford to take care of a baby. Families that do not approve of abortions can also create problems for pregnant teens, as carrying a baby can lead to added stress and increase the risk of dropping out of school. However, concerns regarding the probability of teen pregnancy are not founded on facts. According to a study done by Guttmacher Institute, less than 5% of 15-year-old to 19-year-old women get pregnant, and even less go through with childbirth; these numbers are only dropping as the years go by.

In the United States, the legal age to partake in sexual intercourse varies from 16 to 18. The age is determined by each state, and disobeying the law is considered statutory rape.

“I think it’s silly to put an age on [legal sex]. As soon as you have this limit saying you can’t do something, you’re going to go against it, because as a child, that’s just the logic,” Molly Tam said.

The lack of importance teenagers place on the legality of sex can be viewed as evidence of a necessity for a new control mechanism. The current solution in place is sexual education. Sexual education is proven to lower birth rates and extend the average time before initial intercourse among students. However, 20 states still do not require a sexual education curriculum in their public schools.

STDs are higher in states that have no or incomplete sexual education. For example, Mississippi’s sexual educators need state approval to teach about STDs and do not include a curriculum on condoms. They also currently have the highest rates of gonorrhea in the United States, according to a 2018 study by the CDC.

Vermont’s sexual education includes information about STDs and covers the topic of condoms. According to the same CDC study as above, they have the lowest rates of gonorrhea in the United States.

Underclassman Luna McFee* took the California sexual education course, which is similar to Vermont’s curriculum regarding protection during sex and STI information.

“I did have safe sex, thanks to the school and Teen Talk [the California sexual education course]. I was able to understand my options better and know where to get protection and my protective options,” McFee said.

But Mississippi’s methods are more common than one would think, especially when sexual education is proven to be so efficient at eliminating teen sex. According to the NCSL, 20 states have yet to mandate a sexual education curriculum in their public schools. Even in the states that require sex ed, parents are allowed to opt out of the program.

Members of the Journal of Adolescent Health wrote a research paper on the progress and aspects of sexual education and why it needed improvement.

“Continued public and political debates on the morality of sex outside marriage perpetuate barriers at multiple levels—by misguiding state funding decisions, molding parents’ (mis)understanding of programs, facilitating adolescents’ uptake of biased and inaccurate information in the classroom, and/or preventing their participation in sex education all together,” the research paper said.

Ginny Tam agrees with this idea and believes it also applies to states that are previously progressive with their curriculums.

“I like the way Teen Talk [teaches], they just need to incorporate more of a ‘let’s keep you safe’ [mindset] instead of ‘let’s try and stop you from having sex,” she said.

Many states in the U.S. focus on sex after marriage, the importance of abstinence, and religiously developed sexual ideas. They do not cover the importance of condoms and birth control, LGBTQ+ sex, the need for consent, and providing medically factual information.

Molly Tam says that these shortcomings come from a long history of stigmatizing sex in the United States.

“I think in the U.S., [sex is] way too taboo, and I don’t think that’s good for kids. I don’t understand why you can’t be open about it. Just inform kids about it, so they know what to expect … I think the more you keep it at a distance, the more kids want to explore it,” she said.

The Journal of Adolescent Health’s essay seems to agree with those claims based on research on attitudes surrounding sex and sexual education.

“At the societal level, deeply rooted cultural and religious norms around adolescent sexuality have shaped federal and state policies and practices, driving restrictions on comprehensive sexual and reproductive health information, and service delivery in schools and elsewhere,” the research paper said.

State-mandated sexual education does not consider private schools either. Most of these schools have religious values that limit the education students receive. Due to the lack of regulation on sexual education, many assume parents should teach their children instead. For some students, speaking with a familiar person about uncomfortable topics offers students solace and gives an option for personalized education regarding sexuality or gender. However, many parents have the same biases state education does, perhaps even to a greater extent.

McFee, whose parents are unaware that she is sexually active, is glad that her school taught her sexual education rather than her parents.

“I feel like [sex education] is a more personal topic, and discussing it with someone that I was raised by makes me uncomfortable. I feel like I should always be [my parents’] ‘innocent child,’” McFee said.

Currently, organizations and individuals focused on sex education are petitioning lawmakers to provide students with more comprehensive sex education. However, there continues to be a lack of supporters for sexual education. Opposition from those who would rather keep students sheltered from the realities of sex also helps control the laws about sexual education.

Sexual education is a controversial topic, as the Journal of Adolescent Health explained, since it is highly politicized.

*These names were changed by the authors to ensure anonymity for the sources that were interviewed, in accordance with Carlmont Media’s anonymous sourcing policy.