Pacquiao vs. Mayweather: more than just a fight 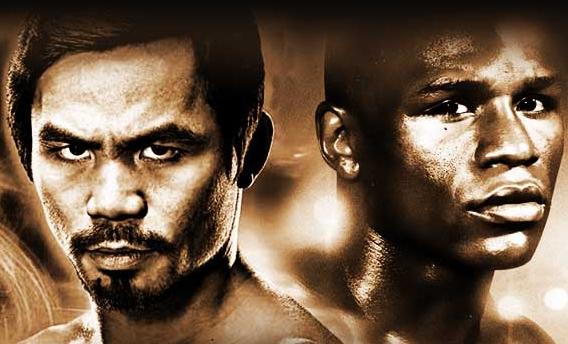 Mayweather versus Pacquiao is said to be the "fight" of the century.

The highly publicized Floyd Mayweather Jr. versus Manny Pacquiao fight is finally happening on Saturday, May 2.

People have been wanting to see this fight since 2009, and now it is becoming a reality.

But is this event really about boxing? It is publicized less as a fight and more of putting two people into the spotlight for a few months by following them wherever they go and turning the fight into a social competition.

A humbled man from the Philippines versus the champ, the greatest, from our home country.

After all, it did take five years to finally agree on a deal to fight in which Mayweather gets 60 percent of the proceeds, gets to choose the date, the weight class, location, and the decision where if he wins, there is no rematch, but if he loses, there is a rematch.

What ever happened to fight just to fight? Play just to play? A lot number of professional athletes these days lose their passion and drive they had for the sport and get caught up with other things, such as how much they will get paid.

The difference between fights from before between Muhammad Ali and Joe Frazier — besides the obvious that they were heavyweight fighters and Pacquiao and Mayweather are welterweight fighters — was that they fought for boxing and nothing else.

A real feud was created because Ali and Frazier had a passion to beat one another.

Today, it is just a big social event for publicity, not really for the fighting. The average ticket sold on Stubhub is $6,820. This is not an event that an actual boxing fan can afford, making it a parade filled with celebrities.

This fight is not boxing for boxing, but a way for everyone to make money.