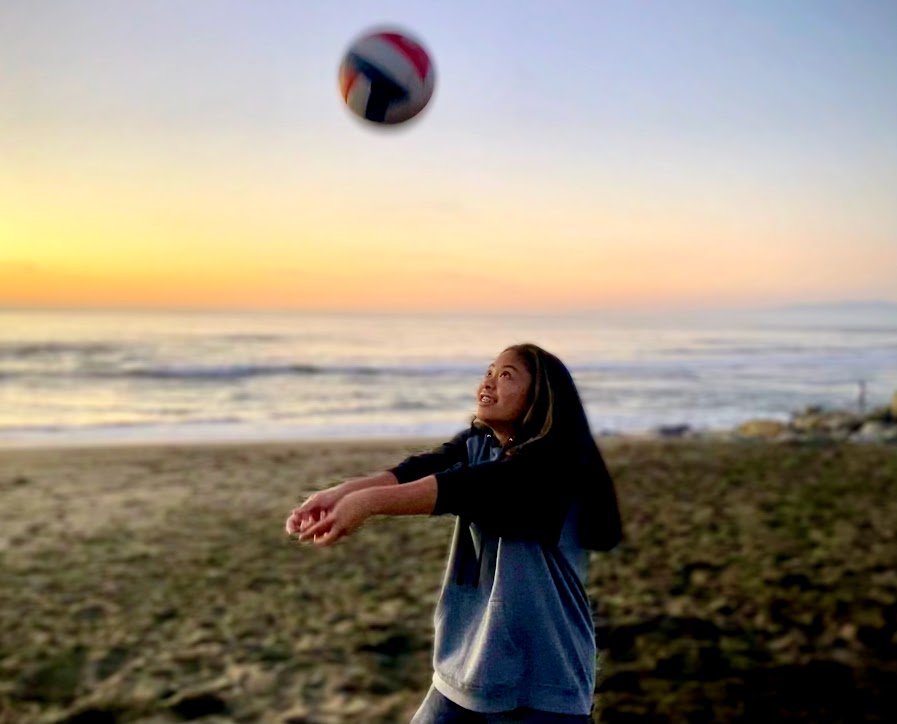 Kiana Domingo, a sophomore, finds a new place to practice while the Carlmont gyms are closed.

The COVID-19 pandemic has not only delayed Carlmont’s sports seasons, it has also limited the way that coaches train and evaluate their athletes.

Due to the setback, sports are now consolidated into two seasons: season one for fall sports and season two for winter and spring sports. Although conditioning took place over the summer and continues into this school year, athletes cannot share equipment, restricting the drills that coaches would typically conduct.

“If one kid uses a piece of equipment, it has to be sanitized before another kid could touch [it],” said Patrick Smith, Carlmont’s athletic director.

In March, schools across the world, including Carlmont, transitioned to distance learning. By April, Sequoia Union High School District’s 2020 spring sports were canceled to limit the spread of COVID-19.

Now that the possibility of sports seasons is looking more promising, tryout procedures are being altered to comply with pandemic regulations. Tryouts usually held in big groups are already impacted by district rules limiting large gatherings. Currently, people are also not allowed to do any sort of indoor activity. Hopeful for a return to Carlmont sports, coaches safely conditioned their players outdoors during the offseason, but the risk of not having a season remains.

“[If] it was December 13 and we’re supposed to start tryouts tomorrow with the current rules we have in place, we wouldn’t be able to have tryouts,” Smith said.

Despite the uncertainty, Carlmont intends to apply some of the same conditioning limits to the tryout process. All coaches and players will need to wear masks except for athletes who play water sports. The number of people allowed to gather is also restricted, which could present issues for coaches when evaluating larger groups of athletes.

“We’re allowed to have pods of 16 people, that can be 14 athletes and two coaches or 15 athletes and one coach, just the combination of 16,” Smith said.

Luckily, some sports like water polo and cross country can have near-standard practices. Unlike most sports, cross country does not involve any equipment, so runners only have to keep their distance with masks on. For water polo, players can still use water polo balls safely during their practices.

“They all have their own ball, and they bring it to and from practice so that we can work on individual fundamentals,” said Molly McNinch, a water polo coach.

Kiana Domingo, a student athlete who plans to try out for Carlmont’s volleyball team in December, described her experiences with club tryouts during the pandemic. She mentioned how the gym’s atmosphere feels quite different because everyone is wearing masks and no one is allowed to high-five each other.

“The feel of the gym is so different,” Domingo said. “Everyone’s wearing masks and [you are not] able to high-five your teammates.”

The thought of not having high school sports sheds light on the impact of athletics on many students. Carlmont and countless other schools are optimistic about their sport’s comeback, but for now, they are waiting for the COVID-19 curve to flatten.

“If it ends up being something where we don’t have a season at all, we would basically have a preseason of conditioning,” McNinch said. “Next year, they’ll come back and have that foundation level, and they’re going to be stronger, and be able to do so much more.”