Panic! At the Disco releases songs for upcoming album, ‘Pray for the Wicked’ 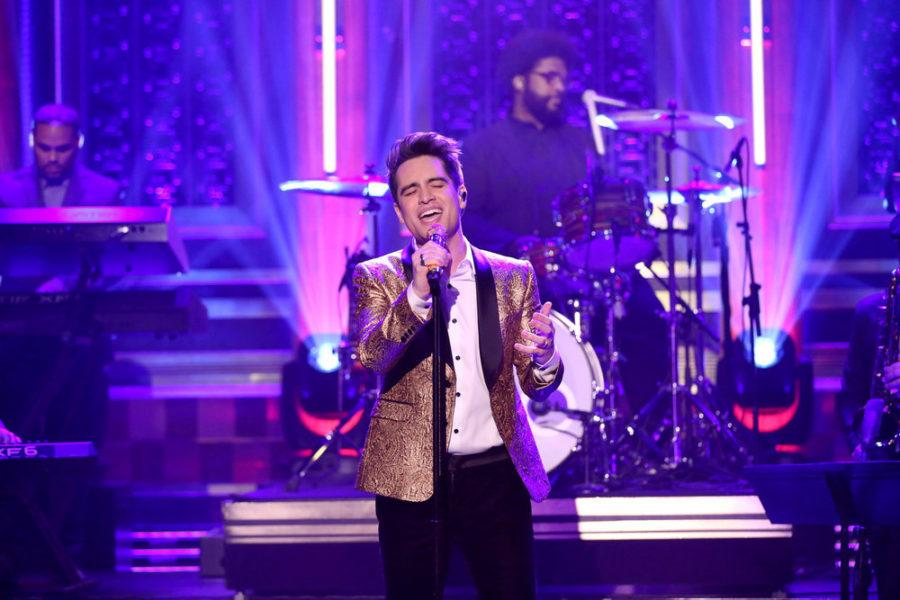 Brendon Urie of Panic! at the Disco performs with The Roots as a guest on "The Tonight Show with Jimmy Fallon" on Jan. 19, 2017.

Panic! At the Disco announced that they will release their sixth album, “Pray for the Wicked,” this summer on June 22.

To stir up the excitement even more for fans, lead singer Brendon Urie previewed their new album by releasing two new singles, “Say Amen (Saturday Night)” and “(F**k a) Silver Lining,” along with a sinister music video to accompany the first track.

These two tracks are very upbeat, showing Urie in a more pop style while still keeping his classic rock-style notes and vocal range.

Fans of Panic! At the Disco’s past music will find these tracks very promising, as they are clearly the band’s iconic style with Urie’s amazing vocals that never disappoint.

Both of the songs are not overpowered with synthetic beats or electronic sounds. Instead, both songs have a true instrumental sound to them accompanied with electronic beats in a perfect blend and balance, pleasing any listener no matter what preference they may have.

“(F**k a) Silver Lining” is not a song for everyone, as there is a lot to take in at first with a fast beat and loud chorus. However, fans of Panic! At the Disco will love this track as it displays Urie’s fun persona throughout.

The first track on the LP,  “Say Amen (Saturday Night),” is by far the superior song out of the two released so far. The song is overall energetic and makes the adrenaline of listeners go out of control.

The track talks about a carefree attitude on a Saturday night with no cares of the repercussions of irresponsible actions: “Swear to God, I ain’t ever gonna repent / Mama, can I get another amen? / Oh, oh, it’s Saturday night, yeah.”

The song seems as though it is a continuation of their previous album’s hit song, “Don’t Threaten Me with a Good Time,” a song about hardcore partying to the point of forgetting what happened in the night. Listening to these two songs together can get anybody in the mood to have a good time and to just let go.

“Say Amen (Saturday Night)” was released with a music video to go along with it, featuring a dark side of Urie that we have never seen before.

The video was a prequel of the music video trilogy with “This is Gospel” and “Emperor’s New Clothes,” which both show Urie going from a mental institution to falling into a darkness that eventually turned him into a demon.

The most recent video shows Urie as a sinister criminal that has stolen an ancient artifact, “The Devil’s Key.” He murders burglars that are trying to get this artifact back in the video in ways that make it seem like a game to him.

The video accompanies the song perfectly and just makes fans even more excited for the new music to come from the band this summer.

Both of these songs are promising and prove that Panic! At the Disco will never disappoint.

The release of “Pray for the Wicked” will surely be a fantastic one. This summer can’t come any sooner.