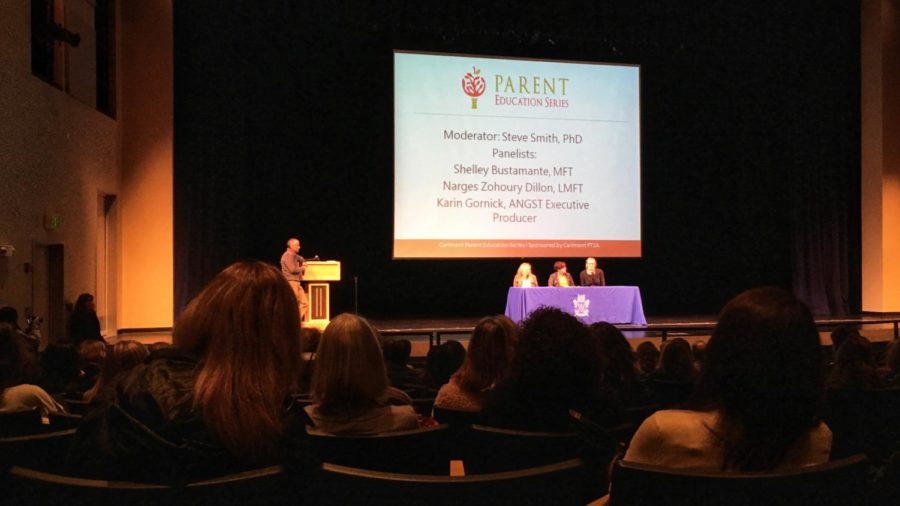 During Parent Education Night, a panel answers questions about anxiety. Executive producer of "Angst" and panelist Karin Gornick said, "Anxiety is a mental health issue that we all deal with at one point or another."

Parent Education Night is a district-wide program meant to tell parents and students about a variety of issues students are facing. This specific Parent Ed Night focused on anxiety.

PTSA President Amy Armstrong said, “I think Parent Ed Night is a really great resource for parents because it’s bringing people who know about the topics really well and presenting it in a clear and concise way.”

The night consisted of two components. The first part was a screening of the documentary “Angst.”  The second was a panel of mental health professionals.

Secretary Terri Plack said, “Anxiety is a very important issue. Roughly 90 percent of students who come into the office for support are dealing with anxiety in one form or another.”

Reactions to the event were positive. Many parents and students alike enjoyed the night.

Isabel Harnett, a senior, said, “I thought the documentary was informative, and I could relate to what the students in the film had to say. I also really enjoyed the panel because I thought it was very helpful in finding out about my own anxieties and how to deal with them.”

The event was well attended, and the panel featured an appearance from the documentary’s executive producer, Karin Gornick, who has experienced anxiety first hand.

“This was my most personal film yet because my son is dealing with anxiety himself. I really wanted to help others in similar situations, so that’s why I made this film,” said Gornick

The next Parent Education Night will be held at Menlo-Atherton on Thursday, Nov. 16. The topic will be growth mindset parenting.

Parent Education Coordinator Alicia Frangos said, “I think it’s really important that we have these events, and I hope a lot of people come. I think students, as well as parents, can benefit from these types of events.”