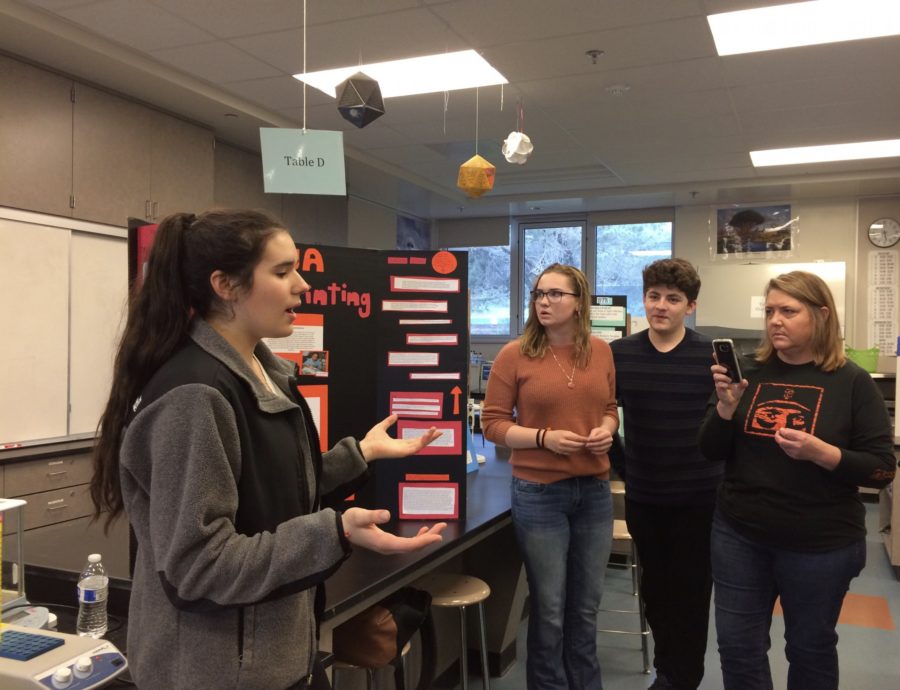 Sophomores Tiara Testa, Jessie Zorb, and Terby Diesh present their biotechnology project on DNA fingerprinting to a group of parents.

Although high school is intended for students, parents began to flood the halls and classrooms of Carlmont instead.

Teachers welcomed visitors into their classrooms on March 16, from 6:30 p.m. to 8:30 p.m. during this year’s Open House.

History teacher Jayson Waller said, “Open House is important because it’s one of the two school-mandated times throughout the year where parents and teachers have an opportunity to openly discuss what is going on in class.”

Throughout the night, students presented various projects they have been working in their classes, and teachers answered questions from the parents. In addition, clubs such as BSU and Baking Club sold food and raised awareness in the quad.

Many people favored specific approaches to Open House that some classrooms fostered, though students, teachers, parents, and community members all learned from this event.

“Open House allows parents to understand the teachers, what the students are learning, and the practical applications of what their learning,” said Kurt Bilafer, a Carlmont parent. “It helps us understand what the teachers think the student should do next year, and how parents can help either with guidance, camps, or extra classes.”

Open House can also be useful to students, whether they visit alone or with their parents.

Sophomore Becky Kosovsky said, “Students can learn about their classes for next year, they can meet new teachers, and they can look back on their achievements from this year.”

The staff made some new changes this year to the plan for Open House. The English department had parents and students go to the English class that the student would take next year, instead of their current class.

“Visiting my future English class was very helpful. I got to meet some of the AS English III teachers and learn some of the [curricula] that we’re going to be taking next year, which was very nice,” said Kosovsky. “However, I’d rather have my parents see all my accomplishments from this year which I have been working hard on, rather than look into classes that I’ve already signed up for.”

Some teachers had students actively participating in Open House through demonstrations and activities held in the classrooms.

In Robotics, Biotechnology, and one AP European history class, students presented projects they were working on and tried to involve the visitors.

The visual arts department also held an art show in F22, displaying various art from all types of art classes.

Visual arts teacher Julia Schulman said, “If the end result of the classes is the art itself, and we have all this cool stuff to show off, having an art show is so much better for the parents than doing a dry explanation of the curriculum.”

These presentations may only be applicable to certain classes. Some parents also draw value from an opportunity to talk with teachers about their student.

“It was great to see a demonstration of Robotics in action, but I’m not sure how you could do that for other subjects such as math. I think what they did tonight was a really good mix of displays and descriptions, which allowed parents a window into what their students are doing now and where they are headed through the rest of high school,” said Bilafer.