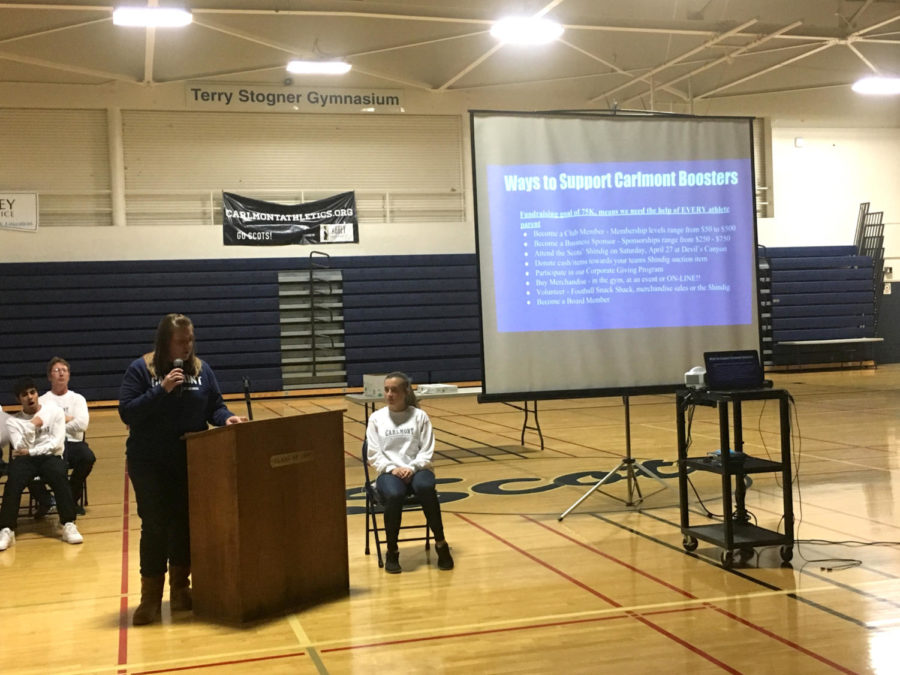 Parents are provided with information about the booster club.

As the spring sports season begins, it attracts not only students, but also parents.

On a late Tuesday afternoon, the Stogner Gym welcomed parents of Carlmont athletes for an informational Spring Sports Parent Night.

“This night is meant to provide parents with overall information about Carlmont athletics, such as safety protocols and booster clubs, and allow parents to learn more about the individual sports that their child is playing,” said Grant Steunenberg, the administrative vice principal. “It really connects parents to the school community.”

During the night, Athletic Director Pat Smith talked about the overall athletic department and discussed sports, budgeting, and equipment.

The school’s athletic trainer talked about concussion and safety protocols, which were meant to give parents a better idea about the safety and health of the players while participating in sports.

In these groups, coaches talked about rules concerning attendance, budgeting, and equipment.

“It’s nice when parents attend because it gives them a better understanding of the sport and makes sure we don’t have any issues down the line,” said Marco Giuliacci, the varsity softball coach. “I think that parents who don’t attend informational meetings like these are more vulnerable to making mistakes, such as scheduling appointments during practices.”

After hearing the coaches talk about the rules, organization, and logistics of their sports, parents were free to ask any questions they may have had.

“This is our first parent night, since our son is a freshman on the JV swim team,” parent Chris Chappell said. “It was helpful to get an overall overview of boosters and sports.  It was good to know how it all happens.”

As the night concluded, parents left with details about their children’s sports, as well as the overall structure of the sports program.

“It seemed very well run, and I was really impressed with the student voices,” Chappell said. “I’m glad to have come.”