Performing arts programs come together for Black and White Gala 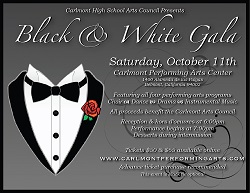 Get out your tuxedos and high heels. Carlmont’s upcoming Black and White Gala, hosted by Carlmont’s Art Council, is set for Oct. 11, 2014.

“[The Gala] is a fundraiser put together by the arts council to help pay for things like the theater, which will support all of the arts departments,” said junior and Choir member Davis Schmitt. “Each individual department is putting on a little show together.”

With tickets priced at $65 for Center Orchestra and $50 for Side Orchestra & Rear Orchestra, all proceeds will go to the Carlmont Arts Council.

“If you want a firmer grasp of the performing arts [department] at Carlmont, you should go,” said senior and Improv/Choir member Adrian Chan. “Even though it’s expensive, the money is going to a good cause.”

The Gala will begin at 6 p.m. with hors d’oeuvres and beverages in the performing arts building. Around 7 p.m., guests will make their way to the main theater for entertainment provided by Instrumental Music, Dance, Drama, and Choir.

At intermission, guests can expect a dessert banquet for a sweet treat, along with various smiles and laughter they will receive from the performers. Guests can also expect a diverse variety of performances from all departments.

“We will be singing three songs that we will [also] be performing at the Evaluation of Pop benefit concert, and two new songs that we just learned that are in Latin,” said Schmitt.

Along with Choir’s exotic music, Carlmont Dance has new dances planned for the show.

“Carlmont Dance has three dances planned: one as a large group and two with smaller groups,” said junior and advanced dancer Taya Cowan. “It’s going to be fun, so come support Carlmont Dance.”

Instrumental Music will also be there for a full night of melodies, accompanied by Carlmont’s Drama program.

“I am part of the Improv team, Choir, the play, and the Staged Reading Society (SRS),” said Chan. “It’s going to be really fun, and we have [fun skits] planned.”

Come see fellow classmates, friends, and family members perform in an exquisite setting. “It’s going to be a fun experience for anyone who comes,” said Cowan. “Dinner and a show, what could be better than that?”