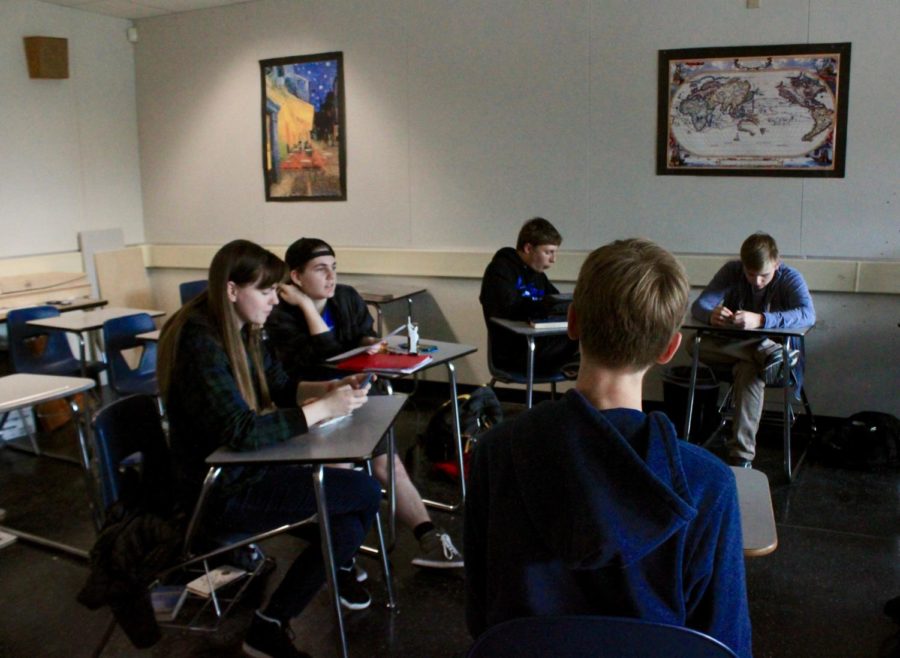 Students in Philosophy Club discuss excerpts from "Cartesian Meditations: An Introduction to Phenomenology" by Edmund Husserl.

Every Thursday, Philosophy Club meets in A2 to read and discuss philosophical texts.

“We are a group of students who are interested in reading philosophy and thinking a lot,” said Kelly Doherty, a senior and president of the club.

The majority of the students in the club are in the Advanced Placement (AP) English and Language Composition class.

Philosophy Club has run for about 10 years.

Doherty has been a part of the club for three years and joined when she was a sophomore. In sophomore year, Doherty had Martin Turkis for English and saw posters for the club around campus. Since she was intrigued by certain texts she had read during her English class, she decided to check the club out.

“The people were really interesting, and I liked how they could read really complex things and tie it into other things they have read,” Doherty said.

Throughout the year, Philosophy Club reads a variety of texts by philosophers such as Descartes and Gettier. Currently, the club is reading excerpts from “Cartesian Meditations: An Introduction to Phenomenology” by Edmund Husserl.

“We read them aloud, and if we have questions then we stop and do a little bit of discussion about that,” said Jessica Haley, a senior and vice president of the club.

Haley also said that the club is not very structured and that they tend to read things they find interesting.

“Anyone is welcome to propose something to read,” Haley said.

Some students in Philosophy Club enjoy reading the books because they can apply what they learn outside of the club.

“We read ‘Utilitarianism’ by John Stuart Mill which was really fun because we could translate that over to AP Econ, Psychology, and English class,” Doherty said.

When students in the club need help to understand certain parts of what they read, Turkis, the advisor, steps in and helps. Other times, the students rely on each other for help.

Bryce Lyford, a sophomore, said, “I think it is very intellectually stimulating. It can be very tricky to understand at times, but having people here who are in the AP class who can break it down helps a lot.”