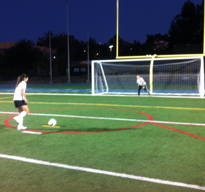 Only 12 yards separate the shooter and the goalkeeper. Will the ball end up in the net, or in the hands of the keeper?

To learn the outcome of this scenario, one would have to watch the Penalty Kick (PK) Shootout taking place at Carlmont High School starting on Jan. 20, and expected to end on Feb. 5 if there is no rain.

Last month, Carlmont held a dodgeball tournament that was enjoyed by students all over campus. The tournament became very competitive and had dozens of people come and watch the championship game.

Carlmont’s Associative Student Body (ASB) hopes that the PK Shootout will draw out as much attention as the dodgeball tournament.

The rules of the shootout are simple; everybody on the team gets a shot. Players cannot step over the PK spot, and the ball has to be stopped. There are 10 teams and it is a double-elimination tournament, meaning that a team must lose twice before they are eliminated. Teams may consist of no more than six players, one of which being the goalkeeper.

Junior Raine Kerhin, an ASB representative in charge of the event, said, “All the class officers have their own team. The classes love to compete with one another; it’s an ongoing rivalry.”

Senior Theo Fedronic is excited for the event. He said, “I love soccer and even though this is recreational, I’m going to take it seriously, especially to avenge my loss in the dodgeball tournament last month.”

As students continue to get pumped up for the tournament, fans do as well.

Sophomore Lauren McDonnell has been a dedicated soccer player for the past 10 years. She said, “I’m really excited for the PK Shootout. Even though I’m not participating, I look forward to watching the event and cheering on some of my friends.”

With the shootout less than a week away, soccer lovers all across Carlmont can prepare for three weeks of intense competition, class rivalries, and a lot of soccer.