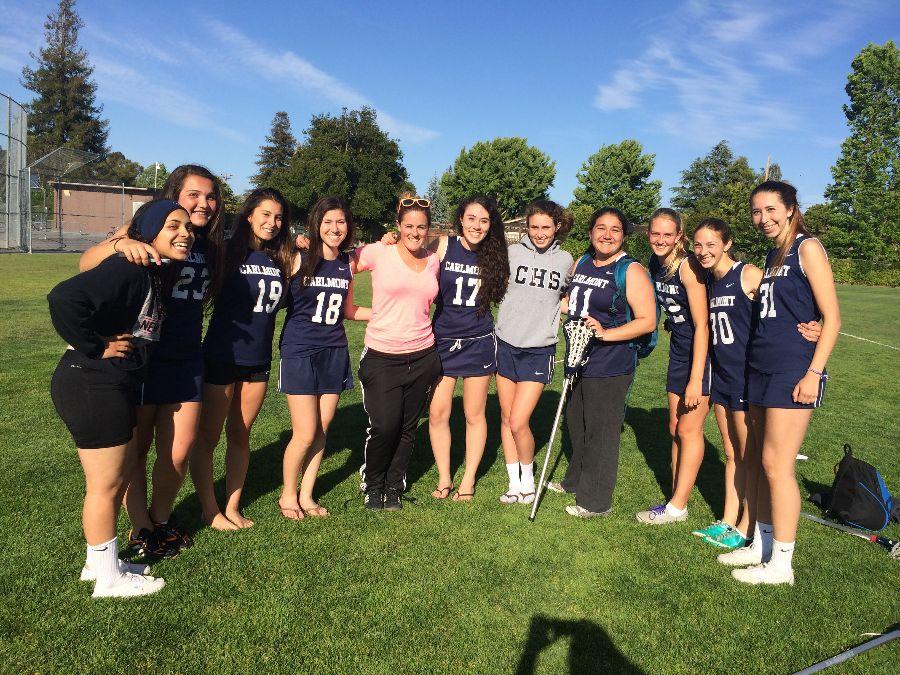 Members of the first Carlmont girls lacrosse team pose after their last game of the season.

The team had 22 girls, all of which helped pave the way for girls in future years to play lacrosse at Carlmont.

“We were actually really good for a startup team,” said sophomore Megan Olazar. Olazar played for club teams years before she attended Carlmont and served as one of the team captains. “Most of the girls were new to it, but everyone tried really hard and ended up getting a lot better throughout the season.”

Senior Gen Kellis said, “I loved playing lacrosse last year. I thought it was an amazing experience and I met so many amazing girls.”

For the upcoming season in the spring, many girls from last years team are encouraging new players to try out.

“Lacrosse is a really good experience.” said Olazar, “It’s a fun sport to get into and I highly recommend the team for beginners because it’s not too competitive, and many other girls are new also.”

“In addition to a supportive team, the game itself was fun to play and interesting to learn. I definitely would recommend [that] other girls try out next year,” Kellis said.

High hopes are held for the 2015 lacrosse season. With such a solid foundation laid by the 2014 startup team, the girls are only expecting the team to get better.

“All the girls will be more experienced, which makes me think we will win a lot more games. I’m hoping that everyone will be a lot more competitive than last year,” Olazar said.

With noticeable improvements throughout last year’s season, there are high expectations for the upcoming 2015 spring season. Although it may be more competitive this year, new players are still being encouraged to try out and join in a new team.