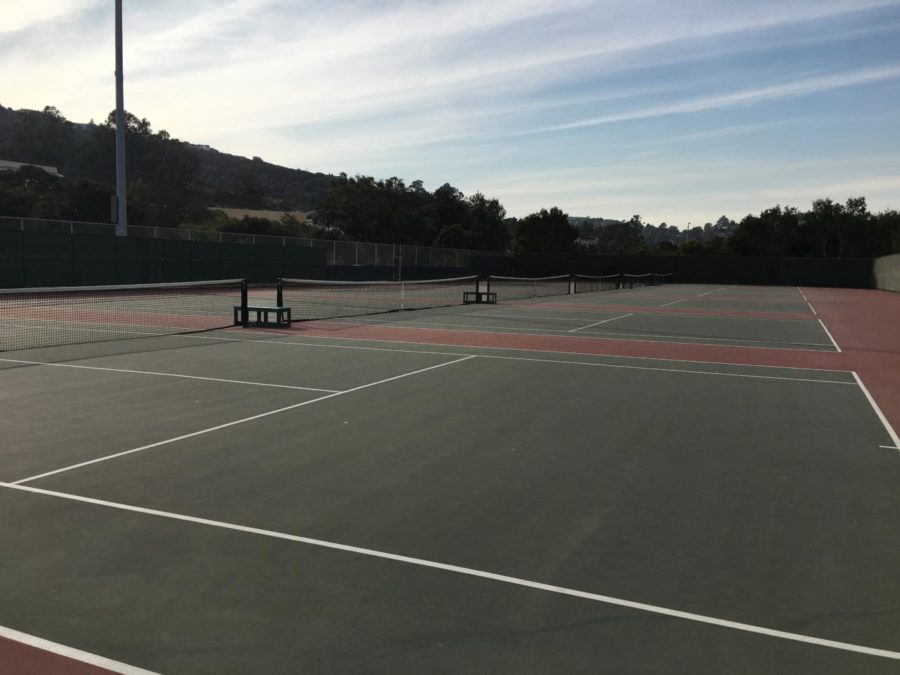 The Carlmont tennis courts were empty due to the smoke from the fires.

Sports events at Carlmont High School were suddenly canceled Tuesday, Oct. 17 after air quality became too poor to play in.

One of these cancellations was the girls’ varsity tennis match, which had been scheduled to be played at 4 p.m. against Hillsdale High.

Sophomore varsity singles player Annika Lin said, “It was an important match because we are tied with San Mateo and we could gain a point over them.”

With the possibility of moving into second place in the league from the match, this was not an optimal time for it to be canceled.

The Carlmont girls’ varsity tennis team currently has seven wins and three losses in their season, tying them with San Mateo, their current main competitor. The battle for second place behind the leading Menlo Atherton is on, with only four league games remaining.

Some players saw a positive side to the cancellation.

Sophomore varsity doubles player Lily Gittoes said, “Because of the air quality, we haven’t played much tennis in the past week, and yesterday at practice we weren’t playing to our full potential.”

The poor air quality was caused by the rapid spread of recent fires, starting in Sonoma Valley on Oct. 8. Winds have pushed smoke from these fires down the California coast, coming in direct contact with the Bay Area. In the past few days, firefighters have been making progress in the containment of the fires, but the air pollution continues.

“I got an email early this afternoon at about 1:30 p.m. from Terry Stogner, the Peninsula Athletic League (PAL) commissioner. Air quality spiked in a few areas, Belmont being one. The tennis coaches talked and decided to reschedule [the match] to Monday,” said Carlmont Athletic Director Patrick Smith.

During the day, the air quality index scale reached a range in Belmont that is unhealthy for sensitive groups, causing the scheduled match to be canceled.

“I think it was right to cancel the game because players’ health is more important than winning the league,” said Lin.

The canceled match has been rescheduled to Monday, Oct. 23, making it their second-to-last league game.

With only four games to go, the league results remain uncertain. The girls’ varsity tennis team is expected to play Burlingame High School Oct. 18 at 4 p.m. as a make-up match from the previous week unless poor air quality prohibits it.