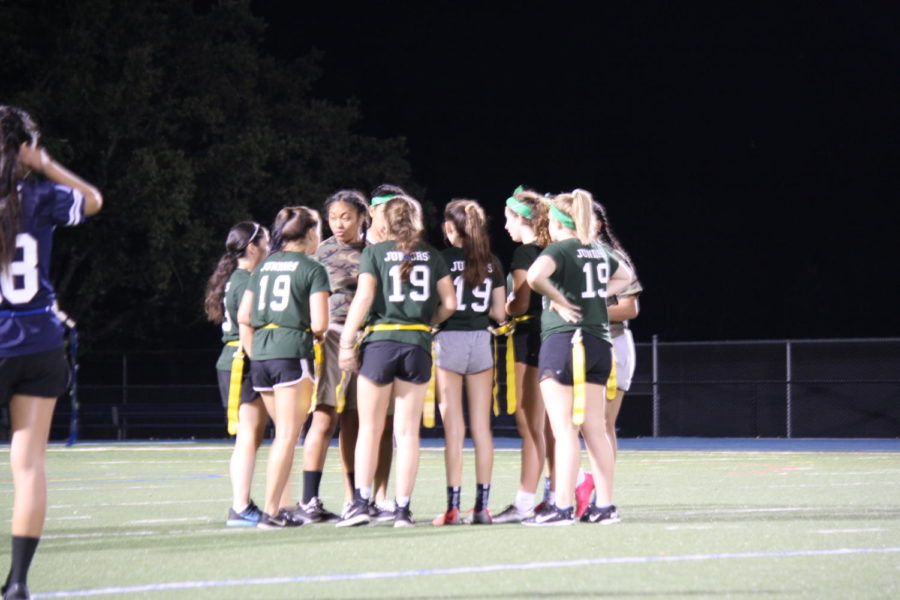 The junior team gathers for a huddle during the Powderpuff game this year against the seniors.

However, powderpuff is a step backward for women.

According to the Merriam-Webster Dictionary, Powderpuff is defined as a traditionally male activity or event done or played by women.

Powderpuff takes place every year at high schools around the country, often during Homecoming Week.

The very name undermines gender equality efforts. It is a reference to women powdering their faces. It implies that girls are delicate beings who would rather spend all day putting on makeup and being in the house than it does for fierce competition and athleticism. There is by no means anything wrong with enjoying makeup, but powderpuff just feeds off of the stereotype.

Having an entirely separate game just for girls is ridiculous when girls play on Carlmont’s football team and when women across the country are starting to take a greater interest in football, such as 13-year-old Auburn Roberts, who is the quarterback and linebacker for her middle school tackle football team. In April 2017,  Becca Longo became the first female football player to sign a letter of intent at the college level, to play for Adams State University, according to the LA Times.

Powderpuff is degrading in the fact that it makes girls’ participation in sports a spectacle. It pushes forth the expectations that girls should be subservient and should be expected to not have interest in breaking the gender binary.

The stigma that comes with being female in sports is already high enough—must we continue to perpetuate it?

Soccer has girls soccer and boys soccer, basketball has girls basketball and boys basketball, but football is just football. The connotation is male and remains so. Powderpuff does not help eliminate this.

According to The Women’s Sports Foundation, girls drop out of sports at twice the rate that boys do after the age of 14.

We don’t call any of the boys’ sports teams the “manly scots,” but refer to the girls’ teams as the “lady scots.”

In an age when three of the nine sitting supreme court justices are women and a woman has secured a major party nomination in the past presidential election, is creating a barrier for how far women can go really necessary?

Instead of those who identify as a female being able to establish the respect they deserve and need, powderpuff instead makes it all a joke. Instead of men and women being seen as equals in society, we feel the need to make a spectacle out of anything that does not subscribe to the patriarchal rules of America.

The problem with powderpuff is that it never truly allows women to break the expected social binary. At the end of the day, boys are still in authority in this situation, as coaches or just simply to offer their two cents, and girls still fit into the expected roles and stereotypes.

People will say, “Oh, it’s a homecoming tradition, we have to do powderpuff every year!”

But if something is clearly outdated and has no place in a modern era, then why persist?

Choosing to play or not play is your decision. But before you lace up your sneakers and put on your flag belt, ask yourself, am I being responsible for girls everywhere?