Power outage shocks audience with blackouts during ‘Singin’ in the Rain’ 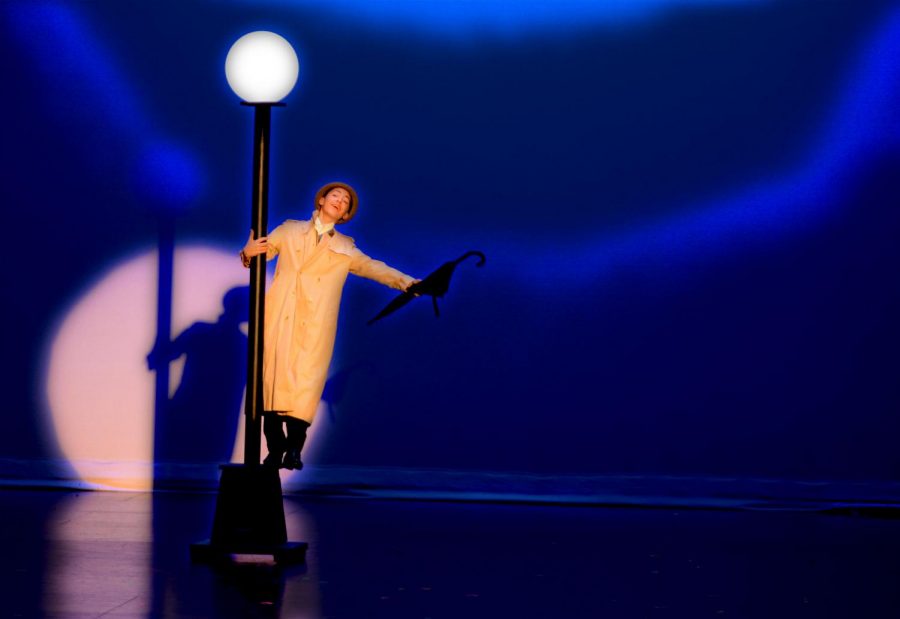 Lead Rory McGann, a junior, performs the famous number from "Singin' in the Rain."

Rick Reynolds, this year’s conductor for “Singin’ in the Rain,” raised his baton as the lights dimmed in Carlmont’s Performing Arts Center (PAC). The audience immediately quieted as they eagerly awaited the start of Act 2 after an almost 30-minute long intermission. But just as the opening notes of the entr’acte began to float up from the pit, the lights cut.

The audience members, now surrounded in darkness, began to murmur. Soon the problem became apparent: it was a power outage – the third one that night.

Due to high winds in San Mateo County, Carlmont High School and its PAC lost power on Feb. 9. A total of 61,936 PG&E customers were affected across the Bay Area, according to NBC News, and as a result, the musical’s typical matinée was pushed back from 2 p.m. to 4:30 p.m.

These outages greatly inconvenienced tons of audience members who had to reschedule their entire afternoons to watch the musical.

“Luckily, I was made aware of the delayed showtime by my friend, who is in the cast. I can understand that it would be confusing for other audience members if they weren’t notified,” said Alysia Tam, an audience member.

Overall, the musical lasted about an hour longer than it should have due to the multiple outages that interrupted the show. Although this frustrated many audience members, for some, it made the experience more entertaining.

“I think it made the whole experience more memorable. It’s always fun when something unexpected happens, and you get to watch how people react,” said Kathy Lin, an audience member.

But for the cast, crew, and orchestra working backstage, the Feb. 9 performance was a completely different story. Not only did they have to find a way to turn a stressful situation into an entertaining show, but some of the seniors had to deal with the potential of never getting to perform their final show.

“I was nervous at first, thinking about what would happen if we didn’t get to perform our final night. We worked so hard to put this production together, and the thought of us not having our big finale worried me,” said Kaitlyn Parohinog, a Carlmont senior and assistant stage manager of the show.

However, after a few stressful hours, the crew was able to put on a musical that, despite a few power outages here and there, was generally successful.

“Tech crew handled the power outages beautifully. The delay in the performance did not affect them other than the time they arrived at the theater. And, per usual, as soon as they got there, they hit the ground running,” said Colin Welter, the assistant director for “Singin’ in the Rain.” “Even when the power went out during the performance and intermission, they kept working with such professionalism and calmness.”

In occurrences like these, the tech crew is forced to work efficiently with new, foreign demands to get the show running again. Similar to Welter, Parohinog believes the crew handled the situation excellently and that it benefited the group with an unique experience for future use.

“Even though there were annoying delays, the crew this year was prepared for anything, and I’m proud to have worked with all of them. I feel like it showed how great these people are, and that when we all work together, we can make amazing things happen,” Parohinog said.

Although this experience brought a dark twist on an otherwise quite popular show, the cast, crew, orchestra, and audience all agree that the outages illuminated the last performance of “Singin’ in the Rain” and created lasting memories for everyone involved.

“The power outages made my final show even more special and unique. When the power went out on the final button of the closing number, the whole audience got to their feet, and we were just so impressed with the cast, crew, and orchestra’s hard work and endurance. It was a show I will never forget,” Welter said.