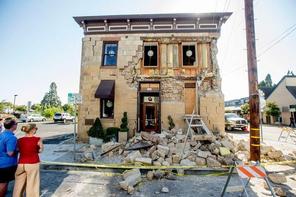 The strongest earthquake that has occurred in decades in California’s Bay Area struck Aug. 24 at 3:20 a.m.

With a reported magnitude of 6.1, the earthquake and its aftershocks dealt significant structural damage to the cities of Napa and Vallejo, towns located within 10 miles from the earthquake’s point of origin. Power lines, streets, and building foundations all suffered fractures and other forms of damage.

While farther away, Peninsula residents experienced tremors powerful enough to wake them from their sleep.

Junior Kevin Shu said, “I woke up during the last few seconds of the earthquake. The emotion that I remember feeling was confusion, because I hadn’t had a similar experience before.”

Junior Lucas Coley said, “I woke up to violent shaking and my parents yelling that there was an earthquake. I got out of bed along with the rest of my family, and we stood in doorways in our house until the tremors stopped.”

The precaution of the Coleys’ is a fairly commonly practiced earthquake safety procedure. This is because doorways are considered to be among the most stable structures in a house.

However, according to an article titled “Earthquake Facts and Earthquake Fantasy,” this information is outdated. Doorways in most modern houses are not that much stronger than the rest of the house, and come with the added danger of being hit by the door during a tremor.

The course of action recommended over standing in a doorway is the “Drop Cover and Hold” procedure, executed by moving under a sturdy piece of furniture or a table and protecting the head and back of the neck.

This raises the important question of whether Bay Area residents are prepared for a more powerful natural disaster, should one occur in the near future.

Shu said, “My family really doesn’t have any safety measures for earthquakes since serious ones are so rare.”

Junior Arianna Crame said, “Carlmont has a good system in place for earthquakes, but I don’t think would be very effective in a serious earthquake. Many of the kids don’t treat drills seriously because nothing real has happened recently.”

Coley had a more optimistic view of how students would react in an emergency.

He said, “I think that even though many students treat drills like a joke, at the end of the day if a real emergency would occur they would know the needed information from the drills and act appropriately for their safety.”

Regardless of location, citizens should always be prepared to react in the event of a strong earthquake. Earthquake Ready recommends that before an earthquake, a family should create an emergency kit and a communication plan. Remember, in the event of a serious earthquake don’t run to the doorway, instead “Stop, Drop, and Hold.”