Preparing for the SAT comes in various forms 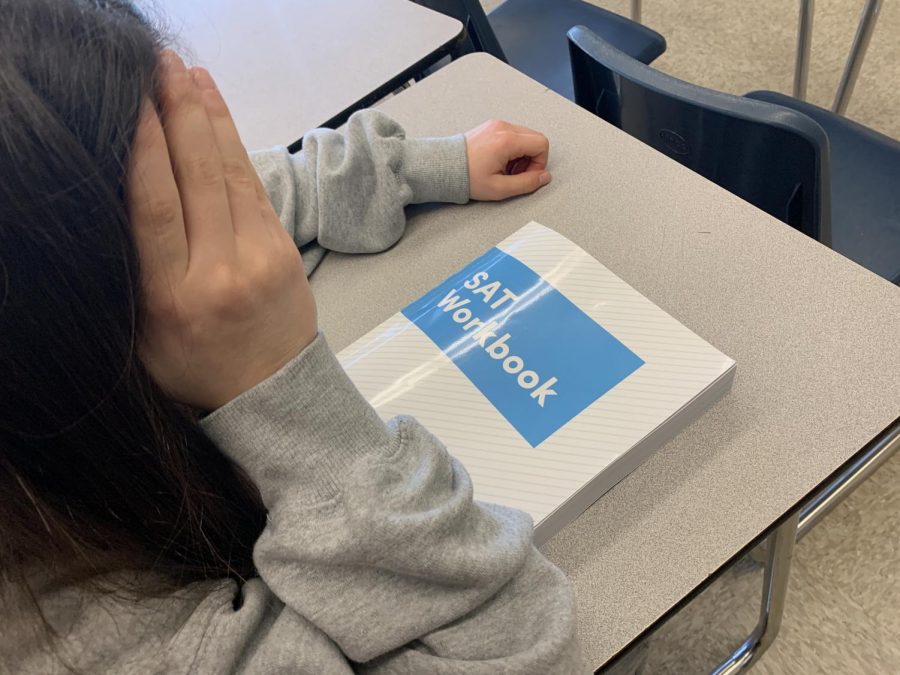 Students are starting to prepare for the SAT as test dates are around the corner.

It’s the time of year when most high school juniors are taking the test that has been talked about throughout their entire high school career.

The Scholastic Aptitude Test, otherwise known as the SAT, is a standardized test that measures test-takers readiness for college in evidence-based reading and writing (EBRW) and math. Test-takers can earn a scaled score in which they can score between 200 and 800 points in each section, for a total of 1600 points. Also, there is an optional essay that colleges may or may not look at. However, it doesn’t impact the overall score.

The SAT plays a prominent role in college applications and can be a deciding factor to whether or not a student is accepted, waitlisted, or rejected from a school they apply to.

With the known significance that the SAT portrays, many students find themselves stressing about what the test means rather than their performance on it.

Camran Hitchcock, a junior, finds herself in this exact situation. “I think the SAT is one of the most important parts of getting into college. For me, it’s what brings on most of the stress because I know this isn’t just some test, but a test that could ultimately determine what college I end up going to,” Hitchcock said.

Many juniors realize the importance of the SAT and the stress that it entails. With their awareness, some students have been able to be proactive and start preparing for the test months in advance.

“I started studying in early January and really began studying a lot more in February,” said Katie Blondino, a junior.

However, there are always students who feel that the SAT is important, yet procrastinate preparing for it.

Unfortunately, Donya Khonsari, a junior, knows that she falls under this category. “I know that I have to start either taking an SAT prep class or use Khan Academy to study, but I haven’t been able to find the motivation to get it done so far,” Khonsari said.

In addition to Khonsari, others feel that they need to be further along in their studying.

“I’m a born procrastinator. I had planned to start studying during winter break as well as sign up for a class, but in the end, I didn’t end up doing either. I first started studying the last day of mid-winter break, and since then, I have taken four practice math tests,” Hitchcock said.

For those who have been utilizing the resources around them, they have had time to figure out what studying techniques work best for them.

“I’m using the Khan Academy practice website because I like how you’re allowed to practice in all the different sections and take full practice tests,” Blondino said.

Whether a student has been preparing all year for the SAT or is still uncertain about how they’re going to study, it’s evident that it can be tricky studying at all. Some students feel this way due to the fact the way the test is structure.

“It’s a standardized test that consists of everything you’ve ever learned and even somethings you’re not familiar with. This isn’t a test that you can memorize the material or just study the night before,” Hitchcock said.