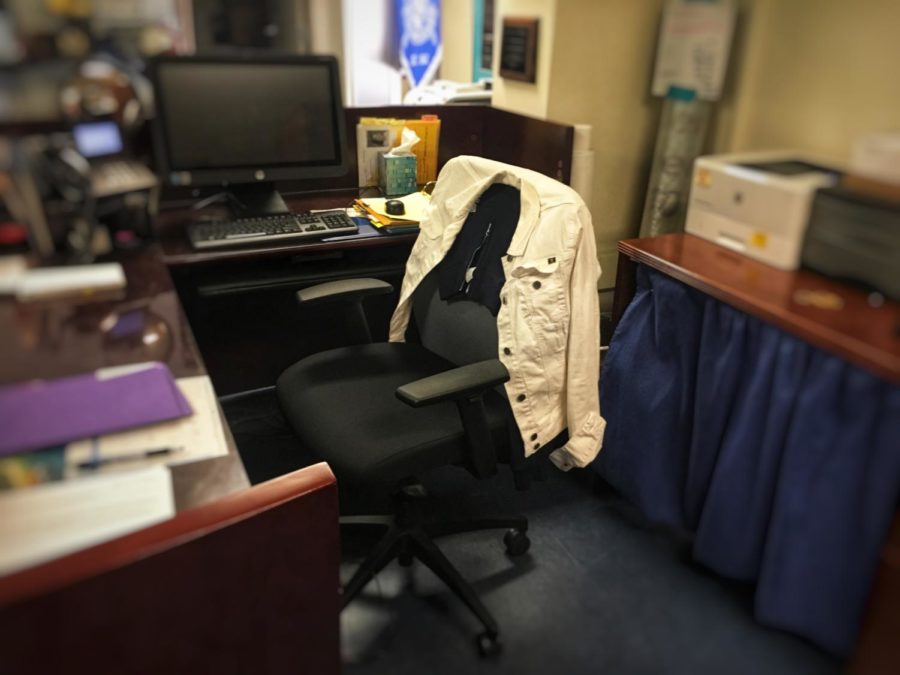 The chair of Ralph Crame's secretary remains empty until a permanent replacement is found.

Every day, students are greeted by smiling faces as they walk into the office. Whether they are there for attendance purposes, aren’t feeling well, or just want to come visit, staff members are always ready to help.

However, currently, students may have noticed that there is one less smiling face outside of Principal Ralph Crame’s office.

After dedicating 20 years of her life to Carlmont, Melanie Fuentes retired from her position as Crame’s secretary on April 20.

There is no doubt that the students and staff are aware of her absence.

“Of course we miss Mrs. Fuentes very much,” said Anne Eggli, secretary to Administrative Vice Principal Gregg Patner. “She has worked at Carlmont for many years, and we all admired her and her work ethic. She is also a very good friend to many of us.”

Nonetheless, the void must be filled, and Dr. Jaqueline McEvoy, Assistant Superintendent for Human Resources, was tasked with finding candidates to fill this position.

“Before participating in a panel interview, all candidates must pass a test of clerical skills that includes topics like Word, Excel, PowerPoint (PPT), and Google Docs,” McEvoy said. “The panel will recommend finalists to Mr. Crame who will then conduct site interviews.”

First and foremost, each applicant must fill out an application form on EdJoin.

Then, after each applicant’s form is screened, they are given a basic test that assesses their familiarity with applications the staff at Carlmont often use like Gmail, Excel, and others. If they pass that test, they are interviewed before a panel, which recommends a few finalists to Principal Crame. Crame and a few other personnel then interview these finalists at Carlmont and theoretically narrow it down to one candidate that will get the job.

However, there is rarely one clear choice for positions such as this one.

“When it gets down to two candidates, sometimes we can do reference checks. From reference checks, we can get a better idea of their work ethic, whether they would be a good fit, and then we can make a selection from that,” Crame said.

On the contrary, it is possible that no candidates are selected, so the application on EdJoin is open until a faculty member is found.

“If from this process we are not comfortable with any of the applicants going forward, we can go back in and look at some of the applications that have been submitted after the screening process took place,” Crame said.

Although the candidates have not yet even reached the panel, as their clerical test was on May 9, Crame already knows what he is looking for.

“I am personally looking for someone that can manage my calendar because there’s a lot that comes through,” Crame said. “I also need somebody that can work really well with the staff because the principal’s secretary is often the first person a staff member comes to talk to when they have a question or need to come see me.”

Aside from staff concerns, parents of students tend to want to bring their issues straight to the highest figure of authority, or in this case the principal. However, because of Carlmont’s complex administration, a lot of common issues are handled by specific people.

According to Crame, his secretary will need to be able to know how the staff works so that he or she will be able to communicate effectively with staff and parents and can point them in the right direction regarding who to go to with their concerns.

It may seem that the principal would be overwhelmed without a secretary. However, both Susan Butler and Melissa Leviant, part-time office assistants, are sitting in as temporary secretaries to Crame until a permanent replacement is found.

Nonetheless, there is no doubt that the right person for the job will eventually be found and they will be welcomed with open arms.

Eggli said, “I am confident we will find a competent person to take on the position, and I know I can speak for the rest of the secretaries when I say we will support that person 100 percent.”