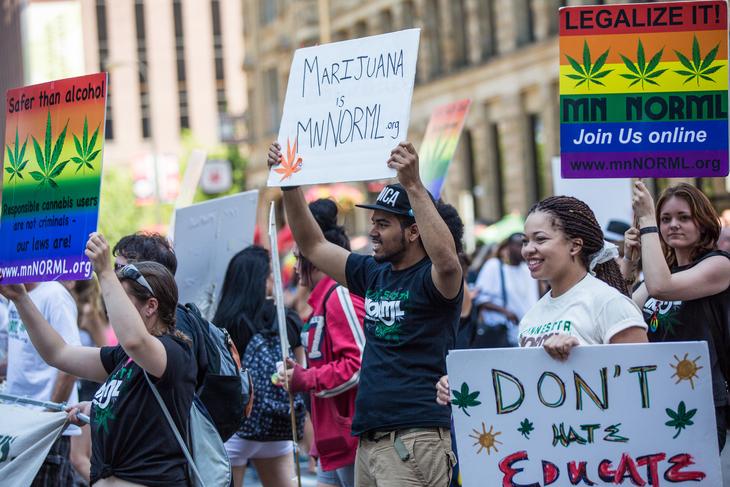 People gather together to protest for the legalization of marijuana.

On  April 2, hundreds of protesters openly smoked marijuana in front of the White House to bring attention to laws that send thousands to jail each year for possession of the drug.

The activists had planned to parade a 51-foot inflatable joint to get President Obama to ease federal laws against marijuana.

The Secret Service allowed the protest, but they blocked the protesters from carrying  the inflatable joint onto Pennsylvania Avenue due to safety and security concerns.

Police at the event made no arrests. In fact, of the dozens of people that were openly smoking cannabis, only two citations were made.

This annual protest, which usually takes place on April 20, was rescheduled to show that the protesters saw this as a pressing matter.

“I don’t think that the public smoking would have done any harm if it was a somewhat a peaceful protest. However, I’m surprised that such a large number of people would risk being sent to jail for the legalization of marijuana. I think it shows how important it is for these people,” said sophomore Scott Criswell.

According to USA Today, the organizers of the rally say that President Barack Obama should remove pot from the list of Schedule 1 controlled substances, which includes heroin and other addictive drugs.

Obama refrained from taking action to decriminalize marijuana. He said that changes like these need to come from congress, suggesting to the protesters that they should switch their rallies to congress buildings.

“I think that sooner or later [selling and buying marijuana] will be legal, since a lot of people use the drug and more and more people are starting to support making it legal,” said sophomore Matthew Matias.