Pro sports are back, but nothing is the same 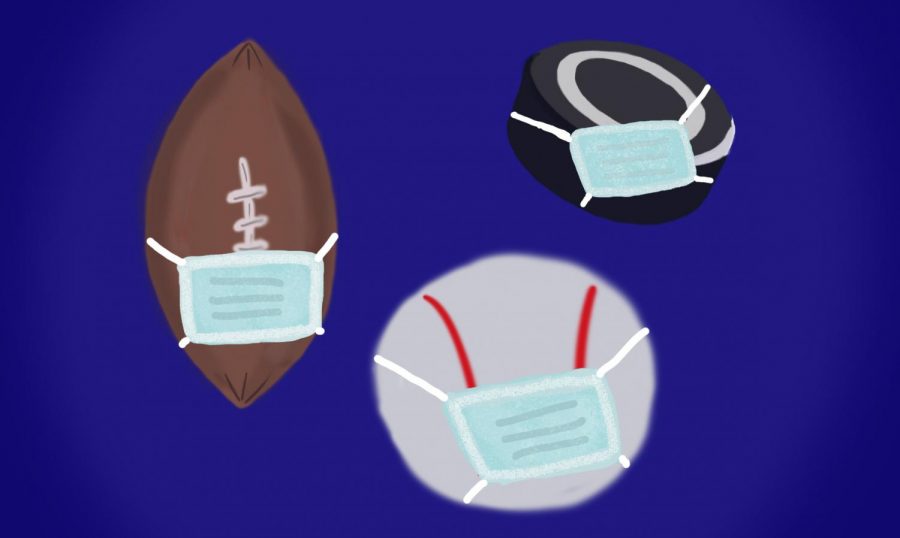 Though leagues like the NFL, MLB, and NHL are once again able to compete, COVID-19 is still leaving its mark on professional sports.

In April, the cover of Sports Illustrated did not feature Serena Williams, Lebron James, or Stephen Curry. It didn’t even feature a sports team. Instead, the cover photo was nothing but row after row of empty stadium seats, silent and deserted.

That image has been the theme in sports for most of 2020: arenas have sat deserted and dusty while the world sheltered from COVID-19. In past months, players have returned to the court, field, and rink. But for both teams and their fans, a return to normal is still a long way away.

“The best part of having sports back on TV is that I have something to do on the weekends,” said Thaddeus Duffy, a senior. “On TV, the watching experience is mainly the same, even though it is a tad bit odd seeing empty or limited capacity stadiums.”

Most states’ health guidelines severely restrict the size of crowds at sporting events to protect against the spread of COVID-19. For many teams, fans remain completely absent from games.

“Through ongoing dialogue with State and Santa Clara County officials, and in accordance with public health guidelines, we can confirm that we will begin our season on September 13th against the Arizona Cardinals without fans in attendance,” said the San Francisco 49ers in a preseason statement. “We will continue to work with State and County officials regarding the potential to welcome the Faithful back to Levi’s Stadium later this season.”

Recent state guidelines allow the stadium to host a limited number of fans. However, Santa Clara County has refused to let fans back into Levi’s, citing concern over a potential superspreader event.

In addition to limited stadium capacity, sports leagues have placed strict safety guidelines on teams and staff. For NFL teams, tightened health and safety regulations include frequent virus testing, a video system to monitor mask usage, and severe discipline for failure to comply with protocol.

In the MLB, player safety was called into question even after the season had ended. Los Angeles Dodgers star Justin Turner caused controversy when he celebrated the team’s recent World Series win without a mask, just after receiving a positive COVID-19 test.

The league had faced outbreaks earlier in the season, leading to postponed games and tightened health guidelines. Though the MLB was able to finish the season, Turner’s actions have caused concern for players’ and staff’s health and safety.

In addition to strict health and safety regulations in most leagues, the onset of COVID-19 has meant that many sports have begun or restarted their seasons at unusual times. The NHL was forced to postpone its season earlier in the year, finishing in September instead of April.

“It was really nice [to have hockey back], but it was kind of a shock,” said San Jose Sharks fan Ariella Bacigalupi, a senior. “I’m not supposed to be watching hockey during the summer.”

Regardless of challenges, following a favorite team or sport can provide a sense of comfort and normality.

“[Watching hockey] is almost therapeutic,” Bacigalupi said. “Watching it every year and having a jersey and having something to talk to people about […] makes me feel better about myself.”

With sports on a local level also feeling the effects of COVID-19, many student-athletes turned to professional sports when their practices and competitions were canceled.

Though sports have made great progress since April, normalcy is still a long way off. Every day, teams are faced with new unknowns and complications, from outbreaks to postponed games. It remains uncertain as to when those empty stadium seats will be full again.