Prom grows more popular every year despite the expense 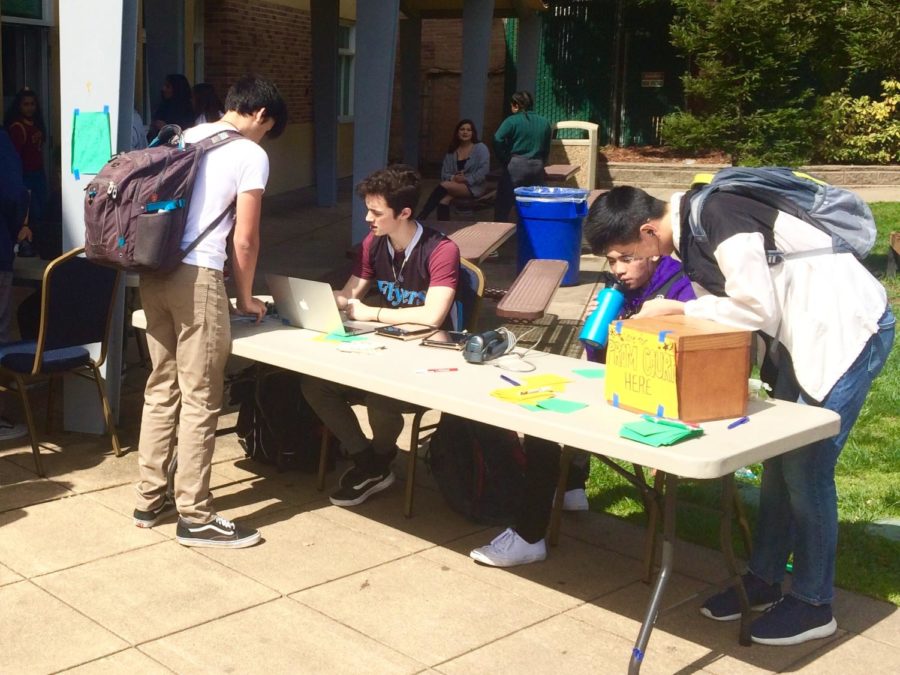 A student buys tickets for prom at lunch near the quad.

Almost 1,000 students are going to prom this year even though ticket prices continue to rise.

The average price of a ticket is now $90, but there are still more students buying tickets than in previous years.

Prom is the premier high school dance and held annually towards the end of the school year. This year, prom will be held on April 12.

In general, only junior and senior students can attend. However, freshmen and sophomores can attend as a guest of a junior or senior.

Ryan Perkins, a senior ASB student, said, “I think their starting price went up by about $10 since I was a freshman.”

The cost could have been worse, however, as the ticket prices could have risen to over $100.

Jim Kelly, the ASB teacher, said, “We’ve been able to keep costs below $100 because of the large number of people who attend.”

The money from the ticket sales pay for the cost of holding prom, and there have been improvements to the quality of the event over the years.

“I’ve been to two proms. This would be my third,” said Supriya Haldankar, a junior ASB student. “In my opinion, the quality of prom has gotten better because there’s more to do [at prom now].”

According to Haldankar, the number of students buying tickets for prom have increased over the years.

Haldankar said, “It’s going up by about 100 people a year give or take.”

In the end, the price of the prom ticket is not the most expensive part of the night. The majority of prom dresses from Macy’s at the Hillsdale mall are around $100 or higher, and The Men’s Wearhouse is advertising $200 tuxedo rentals. Hair styling, make-up, shoes, jewelry, and other accessories add to the final cost as well. Despite this, ticket sales keep rising.

Kelly said, “Prom ticket sales have become very popular over the last few years. We used to average 700 people at prom, and now we are almost at 1,000.”