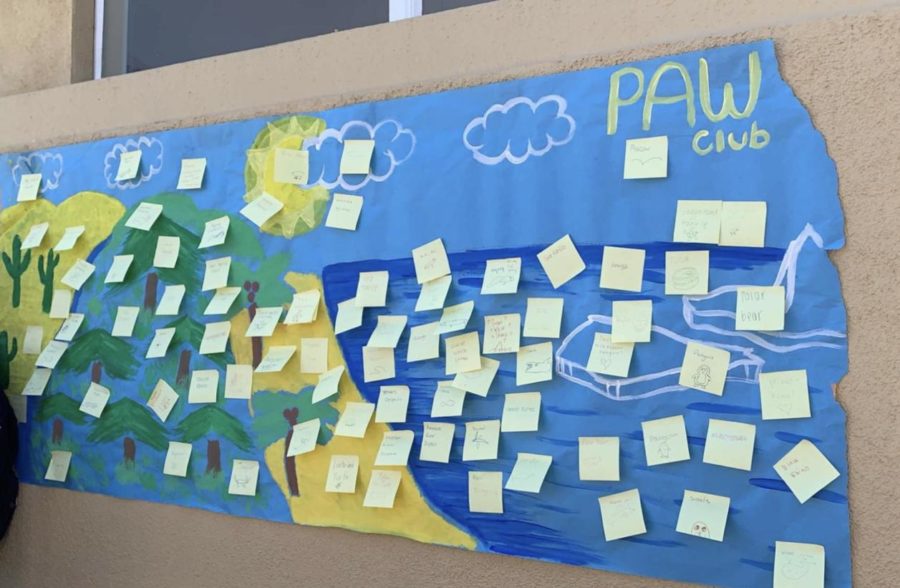 Carlmont’s Protecting Animals Worldwide (PAW) Club educated students with an activity to help shine a light on the different endangered animals around the world.

To celebrate Earth Day, the PAW Club held an interactive event on Tuesday, April 23 where other students could write the name of an endangered species on a sticky note and place it on the part of the poster that resembled where the animal is from.

“We wanted to shine a light on the fact that there are so many endangered species in different environments on Earth,” said Soni Kanaya, a junior and the club president. “We should all be aware of it and do our part to make sure these animals stay alive.”

Many students were shocked to learn of all of the animals that made the list, which included dolphins, elephants, and penguins.

PAW Club’s main goal is to help and protect animals to the best of their ability.

“Our club focuses on most things animal related which often comes in the form of environmental awareness, environmental cleanups, and volunteering at animal shelters,” said Amelia Hsich, a sophomore and the co-vice president of the club. “Unfortunately, we are not allowed to create fundraisers to benefit endangered animals specifically, so we strive to inform instead.”

During their club meetings, which are once a month, the club usually plays multiple games that bring attention to all of the different endangered species. After the games, they typically present local volunteer opportunities, most of which include working at non-profit shelters in the Bay Area or summer programs that focus on the conservation of species.

According to Carole Pierce, the supervisor of the club, there has been an animal protection club at Carlmont since 2002. Back then, the club was called the Student Activists for the Protection of Animals Club.

“In some previous years, student leadership also stressed the importance of animal rights issues as well, and we had events like World Farm Animals Day and the Great American Meat-Out Day, which was informative and thought-provoking,” Pierce said. “Working on reducing plastic and other substances destructive to wildlife in our daily lives would be something all students could do, both for animals and people. Endangered species are just the tip of the iceberg in the larger area of habitat destruction throughout the natural world.”

A few of the members, like Allison Uozumi, a sophomore and the co-vice president, have personal goals for the school that they want to emphasize through club activities. She, like Pierce, also believes that recycling or throwing away plastic waste would largely impact the environment.

“My goal for this club is to raise the overall awareness of endangered species all over the world which starts by bringing its attention to Carlmont. We show people how we can help and express the increasing need for awareness of our impact on animals,” Uozumi said. “Picking up plastic bottles or recycling always goes a long way in protecting the Earth as well as the ocean.”

The hard work and dedication of the PAW Club’s most recent activity did not go unnoticed by students. Naya Salah, a sophomore, was glad to see the amount of participation that the event brought out.

The club members strive to remind everyone how much discarding of waste in the proper manner can help animals and their unique habitats.

“As a school, I think the most important thing is to be mindful of our impact on the world. Whether it is picking up after yourself or recycling a plastic bottle that you find on the ground, small things will make a big impact on the overall conservation of species in the wild and our oceans,” Uozumi said.