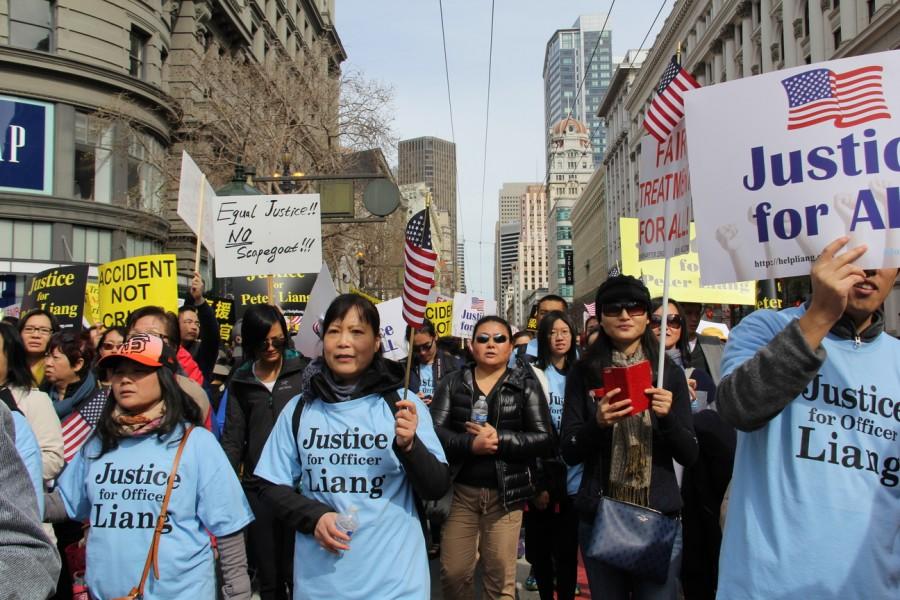 Protesters flock down Market St. in San Francisco, bringing attention to the conviction of Peter Liang.

This chant resonated in the streets of San Francisco, as thousands of protesters turned up to support police officer Peter Liang, who had been convicted of second-degree manslaughter for the fatal shooting of an unarmed African-American man Akai Gurley. Many have called this shooting accidental, and the conviction of up to 15 years in prison has stirred much controversy.

“Peter is at fault for [not handling the situation properly], but not manslaughter. The verdict is not justice,” said Jennifer Wang, a protester.

According to The New York Times, on Nov. 20, 2014, NYPD officer Liang and another officer were patrolling a Brooklyn housing project. Liang, who had his gun out, was in the stairwell and claimed to be startled by a noise, causing him to flinch and pull the trigger. The bullet ricocheted off the wall and hit Gurley, who was walking down the stairs with his girlfriend. Liang had not seen Gurley.

Chunhua Liao, one of the main organizers of the protest in San Francisco, said, “This is selective persecution. There were worse cases of shootings, but the officers involved weren’t even convicted.”

Protests such as the one in San Francisco took place all over the nation. Many protesters believed that Liang was being made into a scapegoat.

“This is a rookie police officer, a newbie, who was sent to the most dangerous place in New York. The police are making Liang an example because he’s Chinese-American, and there’s traditionally not a lot of support from the Chinese-American community, so we’re speaking out,” said Liao.

Indeed, many Chinese-Americans turned up at the rally, passing out flyers and turning the heads of many people walking by.

One volunteer, who wished to remain anonymous, said, “The NYPD is supposed to train their officers, but this didn’t happen with Liang. [The NYPD] didn’t offer this. I don’t know why and I don’t understand.”

Another African-American passersby, Anthony Robinson, was explaining this incident to others who were perplexed by this case.

Robinson said, “There’s an underlying racism in these instances, such as the case of when an officer put a man in a chokehold. There’s discrimination against any minority, and we need to realize that there’s no escape from [the racist society]. It does exist.”

In this case, many Chinese support Liang, while some African-Americans see the conviction as justice.

One lone African-American on the sidewalk who was against the protest said, “This protest is a lie. The press needs to tell the truth.”

According to ABC News, Liang awaits sentencing on April 14 after the jury’s charge of second-degree manslaughter. Meanwhile, many protesters hope that justice will be served.

Wang said, “This is not just about Liang. It’s about punishment that needs to be proportionate to the crime. I hope that this protest will be a wake-up call.”