Protesters gather in San Francisco to ‘March For Science’ 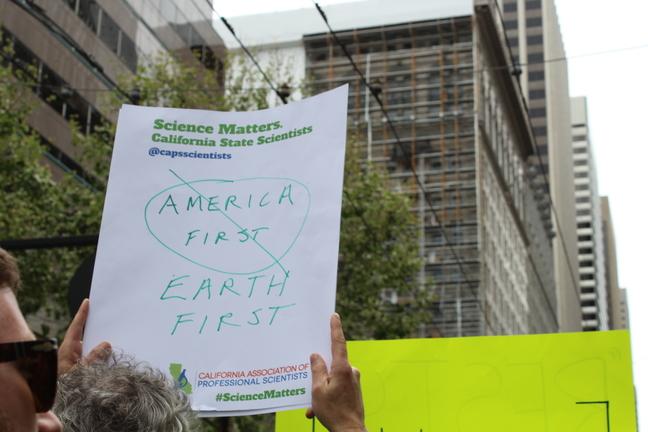 Protesters in San Francisco began their march in Justin Herman Plaza and continued down the main streets.

A swelling mass of tens of thousands of lab coats plunged down the streets of San Francisco.

Raising their Earth Day banners above their heads, these protesters wanted to distinguish themselves from the typical political rally. They sang, danced, and claimed to be “unbiased” despite a few political references and some anti-Trump rhetoric.

All the protesters wanted to do was to send a message to President Donald Trump — science is real.

In response to the President’s remarks on climate change and other issues, protestors gathered around the world on April 22 to “March For Science.”

Because Trump had promised to cut funding to the Environmental Protection Agency(EPA), many people felt the need to support both scientists and their research.

Casey Felton, a junior, said,”I think there is definitely an urgent need for Americans to support science. We need to direct our resources towards spreading science and educate the public. We don’t want people who are uninformed or uneducated to not support certain issues because they don’t understand them.”

In San Francisco, the “March For Science” began at Justin Herman Plaza, and as the day progressed, opened up for keynote speakers to provide their advice on how to advocate for science.

Citing a mixture of facts and statistics, these speakers called for the funding of the EPA in order to research climate change better. Additionally, some speakers denounced Trump’s travel bans and immigration policy for troubling scientists that are trying to remain in the United States with some difficulty.

“I think it’s good that people organized a ‘science march’ because it helps draw attention to the work of scientists and why we need to support them,” said Timothy Yeh, a junior. “We need to put more funding towards the fields of global warming and other issues so that we can help better the world. Without science though, there is no way we can accomplish this.”

In the midst of the Earth Day protests, the White House released a press statement to clarify Trump’s stance on science.

“My administration is committed to advancing scientific research that leads to a better understanding of our environment and of environmental risks,” said Trump. “As we do so, we should remember that rigorous science depends not on ideology, but on a spirit of honest inquiry and robust debate.”