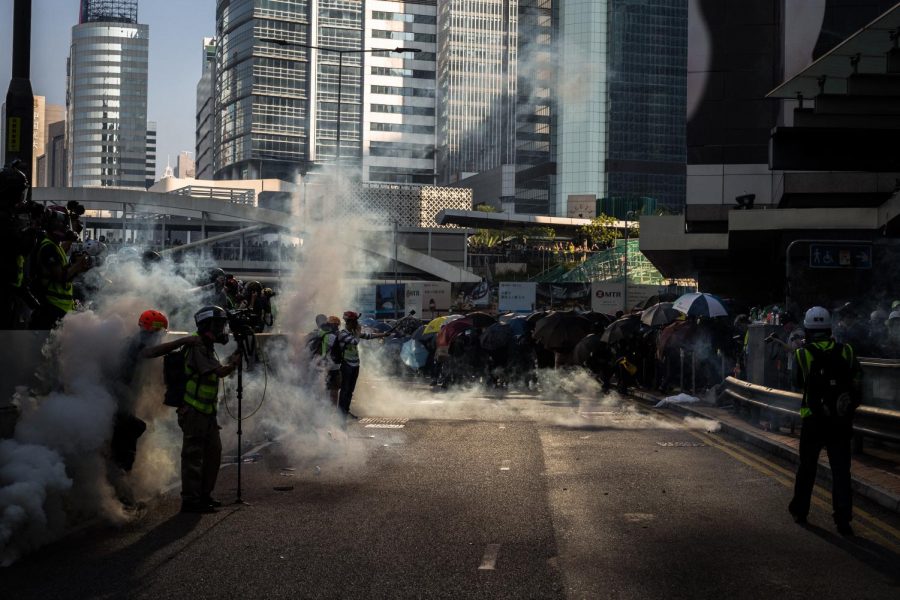 Reporters and protesters in Hong Kong protect themselves from tear gas with umbrellas and masks. Protesters use umbrellas in a variety of ways in their ongoing protests.

While members of the youth are fighting to reduce gun violence in the United States, people of all ages and backgrounds are fighting for their freedom in Hong Kong.

Citizens in Hong Kong have been protesting against China since March 2019. The movement started partly because of the extradition bill, which many people feared would give China too much power over Hong Kong. As of Oct. 23, 2019, the bill was withdrawn, helping the protesters achieve one of their five demands.

Their demands are clear: the complete withdrawal of the extradition bill, the removal of the rioter classification, an investigation into the use of excessive force by police, the release and exoneration of arrested protesters, and universal suffrage in elections for both the legislative council and the chief executive. 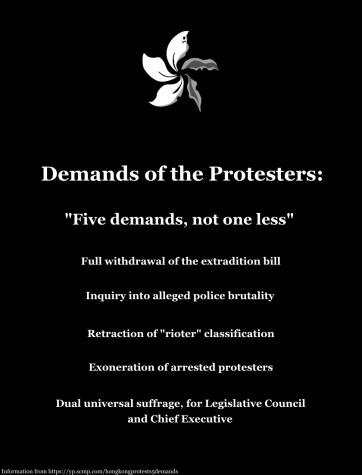 Although the protesters have claimed victories in the elections of November 2019 and the signing of the Hong Kong Human Rights and Democracy Act, only one of the five goals has been accomplished: the withdrawal of the extradition bill. The bill was proposed to allow China to move prisoners from Hong Kong to mainland China, which people feared would erode Hong Kong’s legal system.

Even after over six months of protesting, most of those involved have no intention of stopping until the demands are met. The movement is not led by a single person or community; it is a movement that encompasses people of all different backgrounds fighting for democracy in Hong Kong.

“This protest is based on the concept ‘be water;’ there is no person in charge nor a central organization, it is all organic and spread out to avoid a crackdown,” said a Redditor under the username mehjai.

Similarly to March for Our Lives, a variety of social media platforms have helped, and continue to help, the protesters. Protesters in Hong Kong use Facebook, Instagram, and Twitter, as well as messenger software such as WhatsApp, Telegram, and Line.

“Social media is huge because it helps spread real-time info on police location and tactics, upcoming activities, and other information. Social media is not the only channel, but it is important,” mehjai said.

The wide variety of social media use is vital because of the generational and social differences of the protesters, so being able to reach as many people as possible is crucial for the movement to maintain its supporters. For many protesters, they feel the protests could lead to an event similar to the Tiananmen Square protests in 1989.

“If the protests end violently and Carrie Lam [Hong Kong’s current chief executive] has had enough, she has the right to call in the military to suppress the riots. No doubt they will be merciless, and Hong Kong will become another Tiananmen Square,” said atomician, another Redditor.

While the outcome of the protests is still uncertain, the protesters have the widespread support that was prevalent in other movements in the past. The same can be said about March for Our Lives, with its widespread youth support.

People are protesting all around the world, in Chile, Lebanon, and countless other movements. Likewise, they are unifying themselves to try to make a change. Some will succeed, others will fail; however, the ones that have the largest support and realistic goals will have a larger chance to make the change they desire.