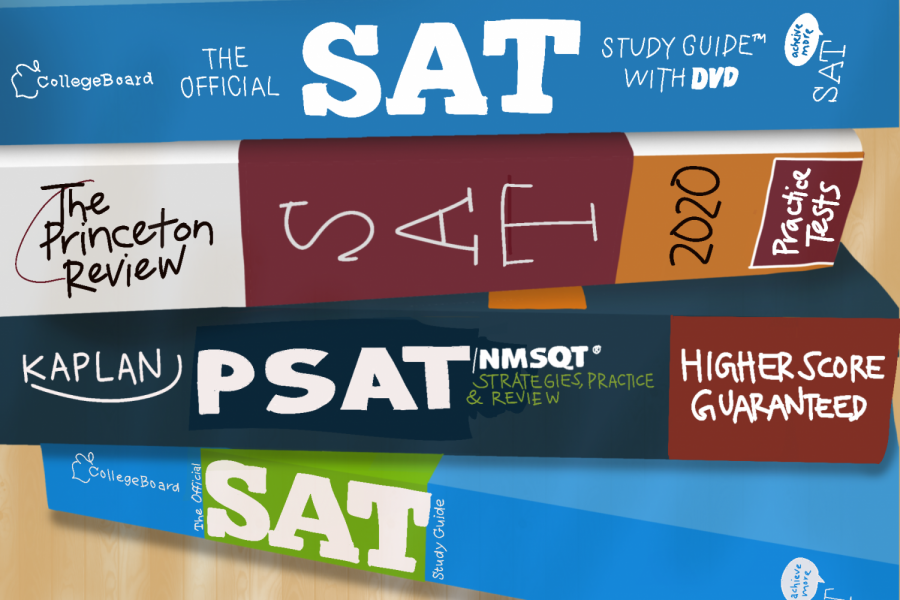 A student's desk is filled with SAT and PSAT prep books in anticipation for the tests.

The cancellation of the Preliminary Scholastic Aptitude Test (PSAT) is yet another loss for sophomores in the wake of online learning, making it even more challenging to stay ahead of the curve in a competitive academic environment.

A mock-up of the Scholastic Aptitude Test (SAT), the PSAT is designed to prepare students for the daunting three-hour test that colleges use to measure students’ ability in core subjects: math, reading comprehension, composition, and an optional essay.

Traditionally, both sophomores and juniors are invited to take part in testing some time in October. However, this year is a little different.

“The PSAT was unfortunately canceled because we are not allowed to have all 10th and 11th graders come to campus to take the test,” said Ralph Crame, principal of Carlmont High School. “We are rescheduling the PSAT for juniors only in January.”

Although neither is required, the PSAT and SAT are often a significant source of stress for students as they face college applications. Most colleges look at the SAT as a critical component of students’ applications, and much of the preparation for the SAT can be attributed to the PSAT.

“I wanted to take the PSAT because I wanted to have a gauge of where I was at and how much I needed to study for the real test,” said Naomi Prince, a sophomore. “I’m not too happy about the cancellation because it would have given me practice.”

Prince isn’t alone in voicing her disappointment over the loss of the PSAT. Carlmont sophomores are now unsure of how to proceed with preparations for college and the SAT.

“I was hoping to use the PSAT as a yardstick to decide whether it would be worth it to take the SAT later on,” said Katherine Yu, a sophomore. “I don’t want to waste my time studying and put money into a test if I don’t think I’m going to do well. I think a bad SAT score could be worse for college than none at all in some cases.”

It is no secret that Silicon Valley breeds high achieving competitive students and that the race to compile the most worthwhile accomplishments and extracurriculars has only gotten more cutthroat.

The phrase “it is never too early to begin” is not lost on parents, especially when it comes to prepping their children for one of the most defining tests of their lives. SAT workbooks and practice tests are pushed on students as early as sixth grade. Many are sent off to workshops, lessons, and study groups beginning eighth grade or sooner in between juggling school and extracurriculars.

Most students view the PSAT as a vital step towards preparing for the SAT. It can be a clear indicator of one’s future SAT score; it can also pinpoint areas of weaknesses that need to be touched on and help fine-tune a worthwhile, effective SAT preparation plan.

“I highly recommend taking it [the PSAT] before the SAT,” said Katherine McCarthy, a sophomore at the University of California, Irvine. “It was administered at the right time, and I think it was good practice and experience because it’s so similar to the SAT.”

Taking this opportunity away from sophomores may be harmful. The aggressive nature of college applications can weigh on students, with the SAT becoming a big stressor.  The PSAT is an integral part of staying on top of test preparation and preparing for college applications in their early years.

“I wish I started to think about college earlier on,” McCarthy said. “I wasn’t thinking about it too much during sophomore year’s PSAT.”

It’s a domino effect. When sophomores could take the PSAT, they used it to gauge where they stood on subjects. After a year of brushing up on their weak areas, they would be eligible to take the test as juniors. This time, their improved scores could qualify for the National Merit Scholarship.

The National Merit Scholarship looks good on college applications and offers financial aid to students who might need help paying for college. Current sophomores will go into the PSAT next year completely blind and without experience, putting them at a disadvantage.

“It’s just really frustrating because I’m trying to do everything I can to stay competitive. This is just a setback in the long run, though,” Prince said. “Now, I’ll just have to work harder to accomplish the same things, but it’ll be worth it.”