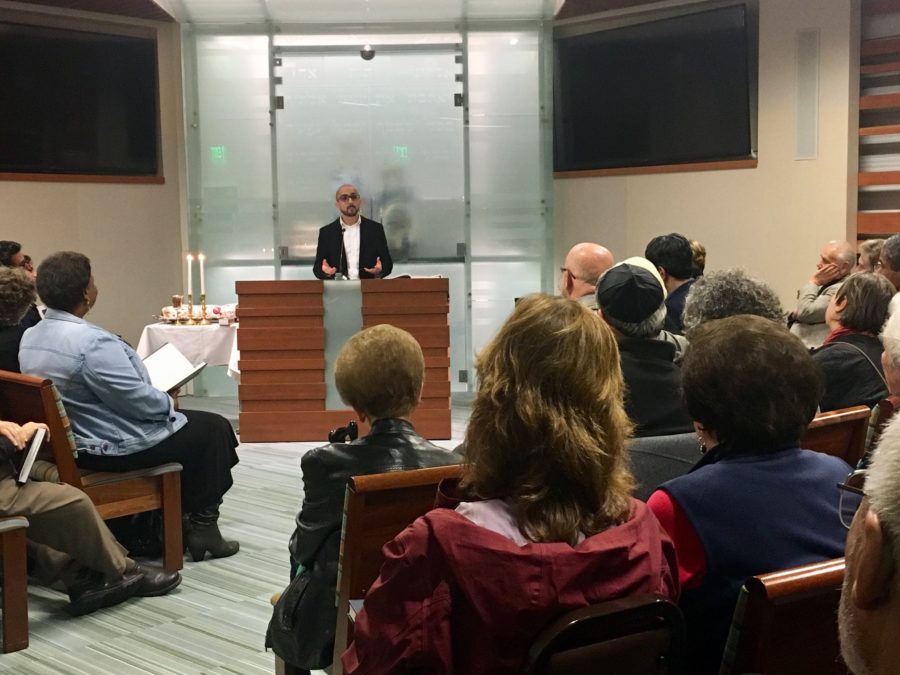 Yazan Ibrahim gives the sermon at a Friday night service at Peninsula Temple Sholom. "Jews and Muslims have more in common than we sometimes care to admit," said Yazan Ibrahim during the sermon.

On Feb. 17, Peninsula Temple Sholom in Burlingame and the Yaseen Foundation, a mosque in Belmont, came to together for a “pulpit switch.”

For the pulpit switch, Rabbi Dan Feder and Rabbi Lisa Delson of Peninsula Temple Sholom went to the Yaseen Foundation’s Friday afternoon jummah prayer to speak, while a representative of the Yaseen Foundation, Yazan Ibrahim, spoke at the Friday night services at Peninsula Temple Sholom. Members of both communities were in attendance at both times.

“As people of faith we have the same values, and it’s so important for us to come together because we hold close common values. People on the outside should see we hold the same values and that we’ll bring them together to make our broader communities a better place for everyone,” said Nyla Ibrahim, president of the Yaseen Foundation.

The idea of the pulpit switch originated in 2008 when Feder invited a Presbyterian minister to speak at his synagogue. It was restarted in 2016 when the rabbis of Peninsula Temple Sholom felt they needed to reach out to local Muslims after the 2016 presidential election. According to Feder, the event on Feb. 17 had been in the works for the past two months.

“We are both religious and ethnic minorities in 2017 that are facing threats on a national and local level. We need to know that we have support from each other,” said Feder.

While the Muslim and Jewish communities are often seen as pitted against each other due to political conflict in the Middle East, the pulpit switch demonstrated otherwise.

Both Yazan Ibrahim and Feder spoke about the power of acceptance and the power of coming together as communities.

“It’s important for us to be making these connections. There’s so much we can learn from each other and make each other and our collective communities better,” said Heidi Schell, a member of Peninsula Temple Sholom.

During his sermon at the Yaseen Foundation, Feder said, “There is so much we share, as Muslims and Jews. We know that. I hope we will learn more about what makes us different too. Relationships grow when we not only appreciate similarities but differences as well.”