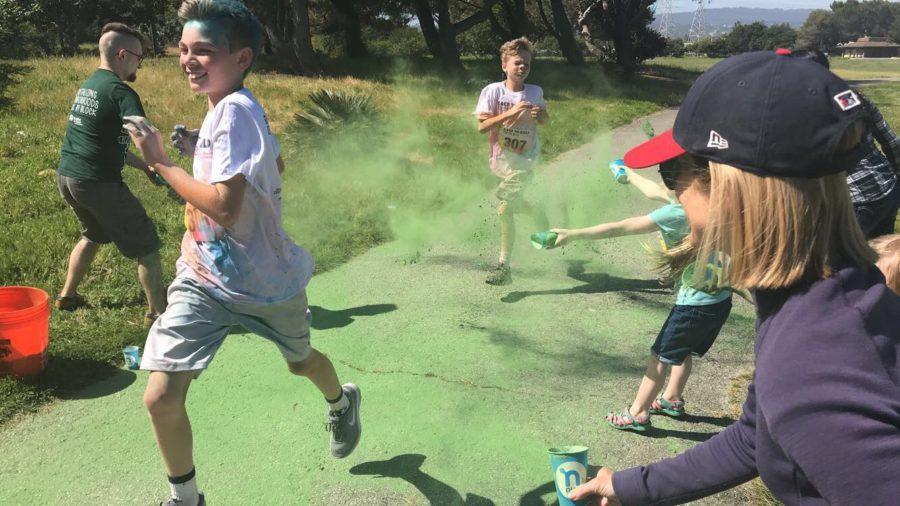 Runners get color thrown at them by volunteers. Some of the volunteers, like Patrick, Hayden, and Zach Tucker, came to the run as a family event to have fun.

It can be hard to afford to live in the Bay Area due to the expensive housing costs. Habitat for Humanity helps build houses for low-income families at little to no cost to them.

“Our mission is to provide affordable housing for families who are struggling to stay in the Bay Area because of the housing issues that we all know about,” said Anthony Singer, the director of communications for Habitat for Humanity for San Francisco.

The San Francisco section of Habitat for Humanity builds houses in San Francisco, Marin, and San Mateo County. Their upcoming project is in Daly City.

“The old firehouse on Geneva avenue we’re turning into 6 new condos. The homes will hopefully be built by the end of summer,” Singer said.

The Habitat for Humanity Greater San Francisco hosted the “Race to Build” color run at Coyote Point in San Mateo to help raise money to fund current and upcoming projects like the Daly City project. This was the first color run they hosted.

The race was a 5k. Along the way, there were different colors being thrown at runners by volunteers. The colors were made of cornstarch and were all the colors of the rainbow. Runners could also pick up packets of color to throw at each other.

Singer said that since there was such a great turnout there will probably be another one in the future.

There was a fee to enter the run. There were also raffle tickets and food trucks, which were donating part of their proceeds. All of these sales were helping to raise funds for Habitat for Humanity.

Before the run, there were free t-shirts for runners to take and packages of colors for runners to throw during the run. The shirts had the sponsors on the back, including The Swinerton Foundation. The Swinerton Foundation is the construction company that is going to be Building Habitat for Humanity’s next project and has helped them build in the past.

“We found out about this run because we are working for the main sponsor. We’re all coworkers from the same construction company,” said Diego Quezada, a construction worker from Team Swinerton.

Singer made a point to thank the runners and teams from all around who came to run for the cause.

“We’re grateful to people in Marin and San Mateo for being so supportive of what habitat does, we couldn’t survive without all the support of volunteers and donators,” Singer said.

– while my colleagues are out on the recruiting trail looking for future Lady Tigers, the team and myself did something GREAT today?#HabitatForHumanity pic.twitter.com/ZJnWSsnzab