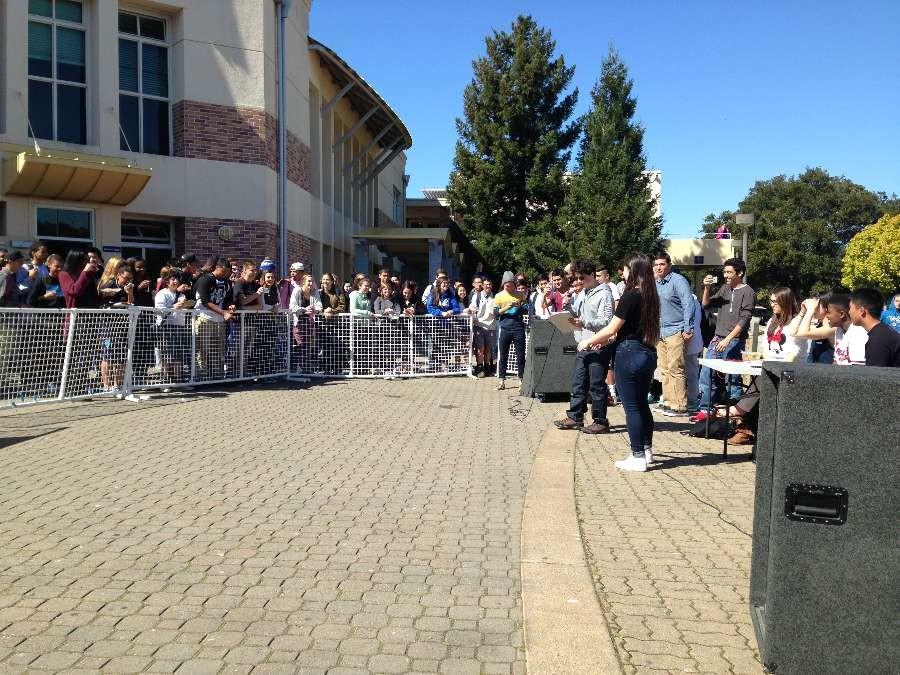 Opponents Alonso and Zabluda square off in the final rap battle.

Within the past month, Twitter has been bombarded with constant tweets, videos, pictures, and humorous memes about Carlmont’s rap battles.

On March 5, students gathered in the quad to watch the rap battle’s final contestants, Dennis Zabluda and Erin Alonso, battle it out.

The competition was created by the sophomore class officers and was made up of two brackets with six rounds.

The rules are that competitors must provide ASB with clean instrumental music and a 16-line, school-appropriate rap.

Sophomore Drew Lehr said, “I think the rap battle was such a big deal campus wide because it included students from all different groups and grades and that really made for a huge turnout.”

Coming into Thursday’s final battle Alonso said, “I feel good about what I prepped and I am pretty confident that I would be able to keep up.”

Alonso’s opponent, Zabluda, expressed his confidence prior to the rap battle. “I’m not nervous at all. When I’m up there, I don’t even pay attention to the crowd. It was a little difficult figuring out some lyrics though, but I got a little bit of help.”

Five minutes prior to the final rap battle, students surrounded and filled the whole quad, eager to listen to the upcoming lyrics of the final rap battle. Zabluda started off by mocking Alonso, then finished with the simple statement, “I am a rap master. I am Dennis.”

The audience and the judges enjoyed his performance. “Dennis, that was fantastic,” said senior judge Amber Governale.

In Alonso’s rap, she said, “I can’t compete with Carlmont’s rap battle classic,” referring to her opponent.

The final winner was a close call determined by the crowd, but with a louder cheer, Alonso won Carlmont High School’s very first rap battle.